Jipa wrote:Oh btw Wibla have you noticed your screen making a noise? Mine has this pretty low fequency hum.. Can't really call it disturbive, but it's definitely audible even with my not-so-silent-computer. Especially it's easy to notice when I turn the monitor off and the sound stops.

try setting brightness to 100. my monitor stops huming over 80. that's because lower brightness levels are achieved by turning on and off of backlight. modulation frequency is something about 255Hz so it can be audiable...
gentoo user
Top

Cant say I have noticed any of that, sorry

You need a robust keyboard? get one of the OLD ibm PS2 keyboards, they can stand everything + you can beat people to shreds with em if you loose

Nice box. You can further improve temps and reduce noise and turbulence by cutting out that grill on your rear fan, porting it to the heatsink and removing the fan mounted to the heatsink.
Top

This box will get a new mobo, cpu and system drive soon. 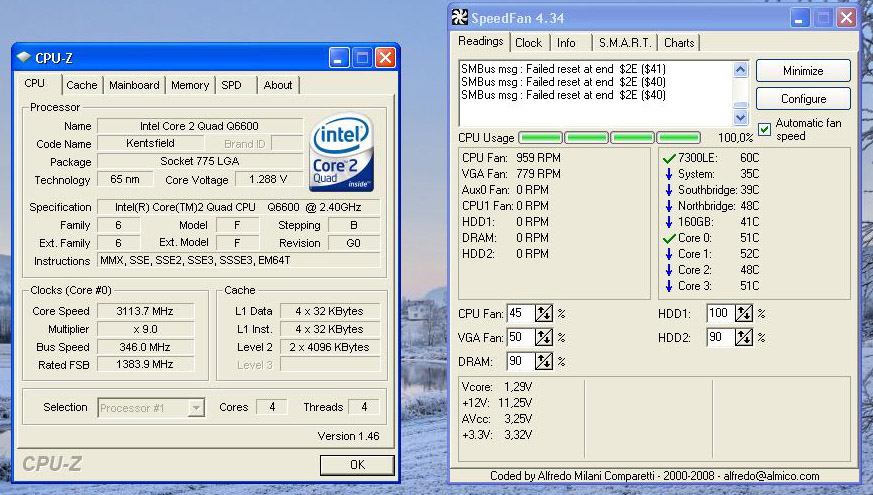 From test-running of the new rig, waiting for the Samsung drive before I put it into the P182
These temps are with the Xigmatek 1283 cooler, pretty impressed with it so far...
Workstation | HTPC | 9.1TB | 19.1TB
Top 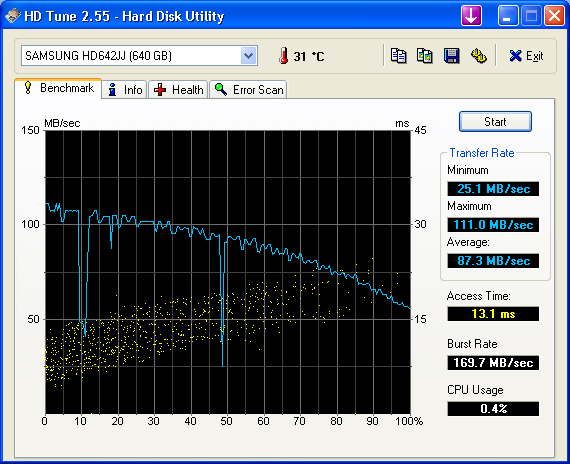 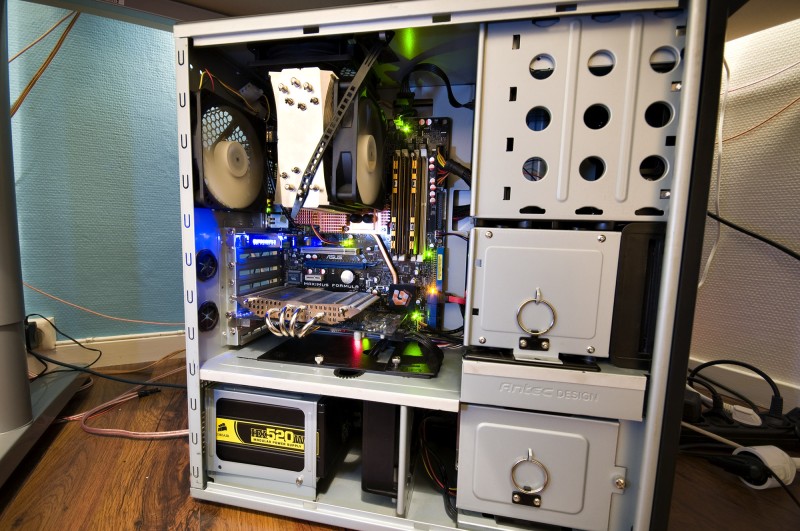 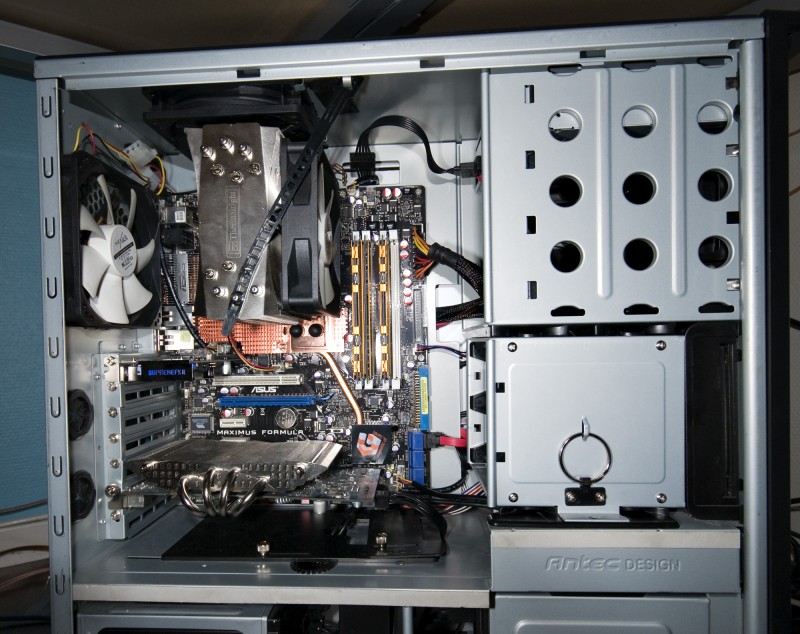 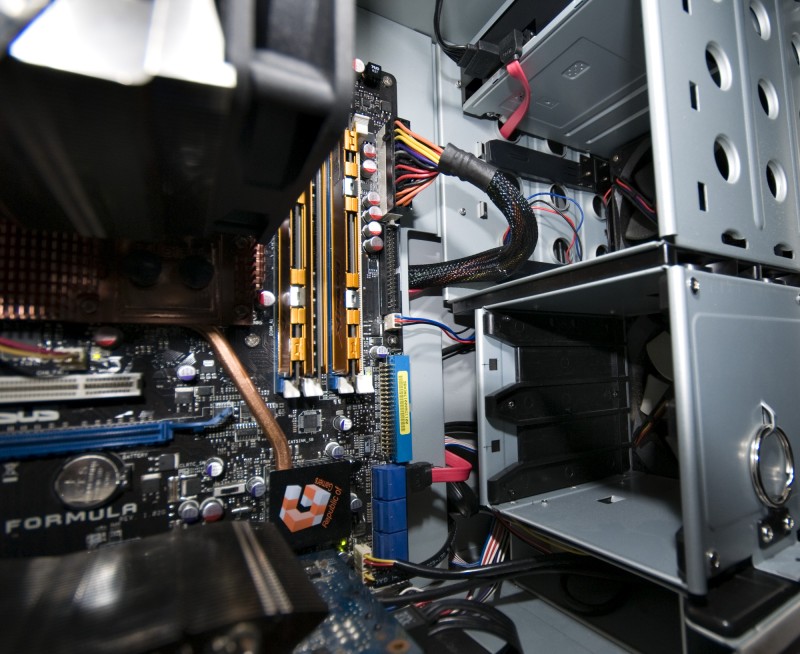 And the backside of the medal... 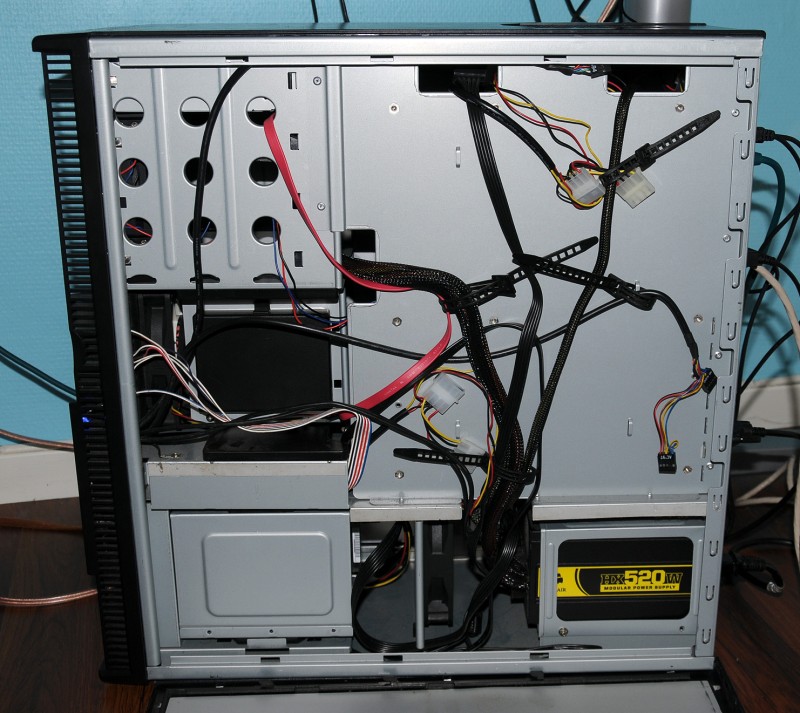 Small update, new gfx card bought a few months ago, finally got around to silence it.. 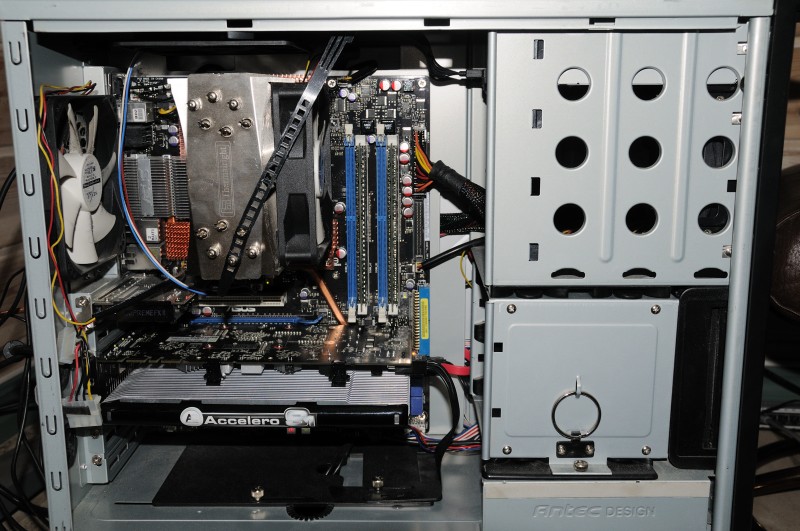 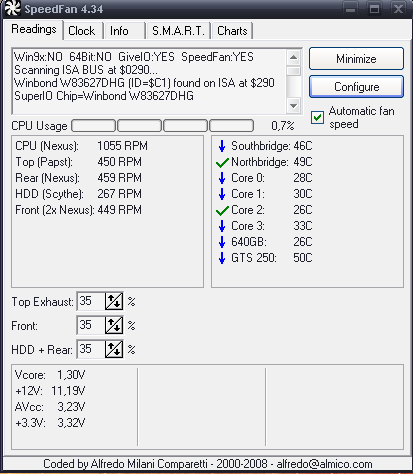 I removed plastic parts from edges of the cooler. that way last aluminium fin is a lot more open to airflow.

don't know if that made a difference, but it can't hurt neither.

Doubt it does much difference really

The ramsinks could need some work tho, the glue is really crappy, almost didnt manage to get one of em on, silly stuff. Seems to stay for the time being tho, guess I'll have to check from time to time to avoid nuking the card.

I've put one slowed down Noctua (~500rpm) on the unused hdd cage and it blows directly between the Accelero and the gfx card, cooling both Accelero and RAM chips on the card.
gentoo user
Top

Wow, I haven't updated this in a while!

I've since nuked the GTS250, got a GTS450 to replace it that was silent with the stock cooler, and then replaced that with a 6870 this fall when my student loan came in. I also bought a 320 80GB at the same time, making my Q6600 seem like new again.

However, the niggling problems with the NB cooling never really tapered off (Maximus Formula SE came shipped with really bad thermal paste for the NB, and I didnt fix it before installing).

Soooooo, christmas and birthday, also surviving another semester (heh), I got some new gear today! 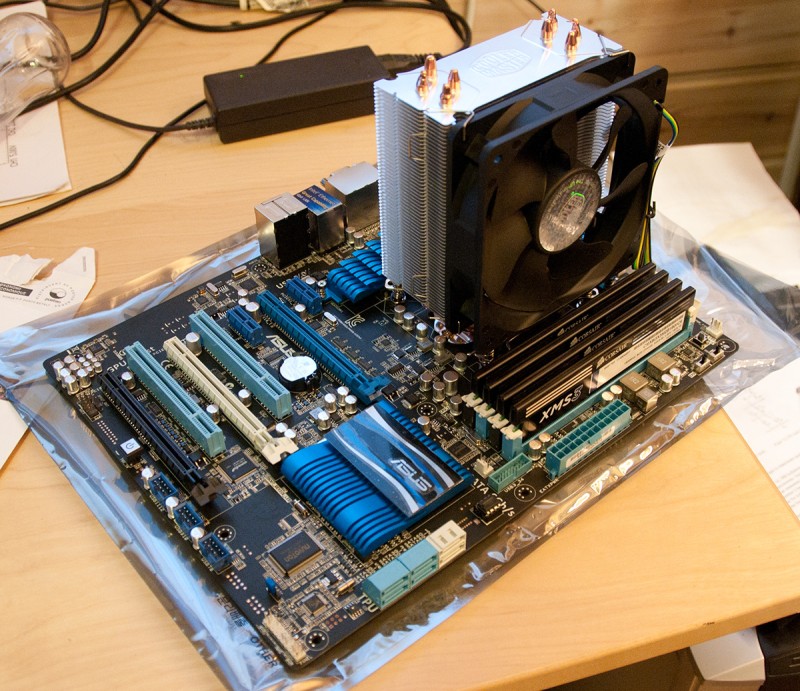 I elected to buy a new heatsink, as I couldnt find the S1155/56 backplate+clamp for my TRU12E easily, and using double-sided tape to keep the fan on the heatsink was dodgy to say the least. Performance is similar, I doubt i'd notice much of a difference in daily use. 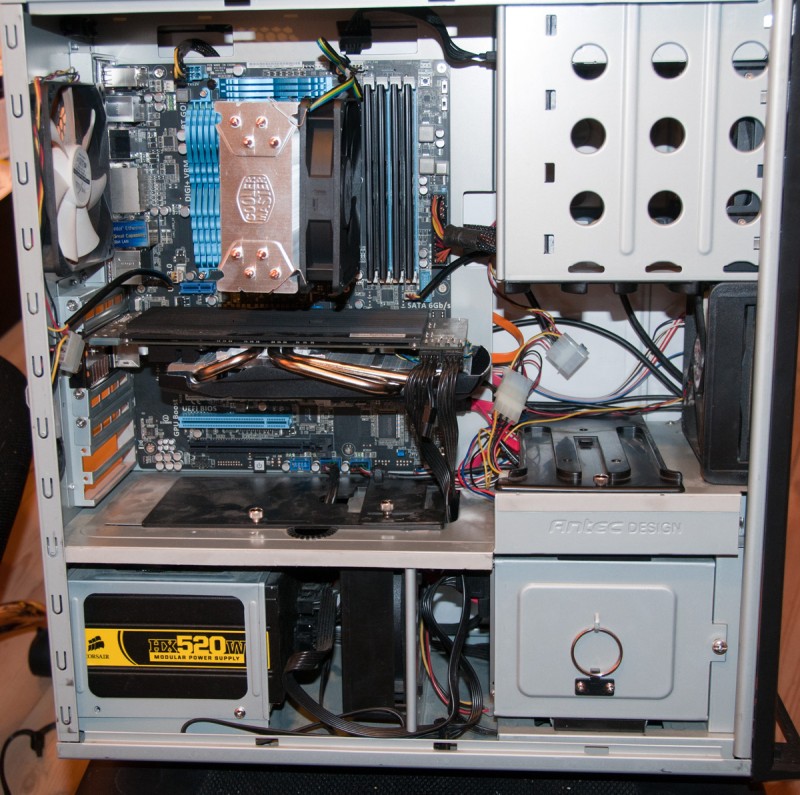 Installed, with some rudimentary cable tidying - I also moved the SSD down behind/next to the PSU so its out of view - it was just lying on top of the chamber divider before, heh.

First impressions going from a Q6600 to an i5-2500k was mind blowing. Everything cpu-intensive is A LOT faster, doing photo editing is easily 2-3 times faster (perceived).

I also 'deleted' the top fan, and put a piece of cardboard there instead, going to evaluate how this work for a little while, but so far I've not seen any bad temperatures, and the noise level has decreased slightly, as has power usage (the oc'ed 2500k uses less juice than the mildly oc'ed Q6600, and has more oomph).
Workstation | HTPC | 9.1TB | 19.1TB
Top

Hi i wondered if you could tell me how you mounted your 120mm fan in the top drive bays, as this is something i'd really like to do with my p182. So i can get 2 air paths through my system 1 for the CPU and 1 for the GPU. Possibly using 2 Silverstone Air penetrators letting me remove my Xigmatek heat sink fan, although just putting in a pair of Nexus's would be cheaper.
Top

I used a kama bay, but they're not for sale any longer :/

You could also use a 4in3 for the same, if you dont want to ghetto it up

I did wonder if I should just get some foam blocks and wedge the fan in, but would like a filter. Which is were i'd have most problems i think.

But i could use a 4in3 unit, might make my build a little tidier as well. Thanks for the advice.

[EDIT] Managed to find a Kama bay on ebay, did have a slight problem installing it (as it looks like you did) in that the rails don't stay in properly. Also it's silver so doesn't entirely fit in but i'll just spray it black at some point.
Top
Post Reply
77 posts