Hi guys, thought I'd post a pic up now that I've finally shaved off another few decibels of noise. It really is pretty darn quiet for a 24 bay server build, I haven't seen many silence focused large bay builds yet. Made this back in November 2010 but only just added the fan controller.

The setup is nearly silent when the drives spin down, and whisper quiet while they are spinning, but still has a nice volume of air running from front to back. My observations are from ~1-2m. Its a server you can have in the living room if need be.

So this pics show the front of the 4U case with 24 hard drive bays:

I know you guys have very good DIY skills. I don't

So the best I've done is taped off parts of the case to cut down on air short circuits, and used 'magical' velcro to attach the SSD and fan controller to the sides of the internal case because the front of the case is covered in hot-swap 3.5" hard drive bays! I've kept it fairly neat so the air can flow front to back un-impeded.

About 84W idling, 115W when all drives are spinning (from the wall). I'll just add drives as I need to expand the storage.
I think the base system without the controllers is around 55-60W, the rest of the idle must be the 3x SAS controllers.

The PSU fan doesn't spin up at either of the power points mentioned above.
I've chosen fans that perform better under pressure differentials.
The Supermicro controllers generate quite a lot of heat which is why I put another fan on top of them blowing down onto them. I've made air gaps for the air to escape from that side of the case as well.

Let me know if you are interested in any more info or pics. EDIT: There are some more pics I posted a few posts below.

This is what it looks like in the room (its just out there): 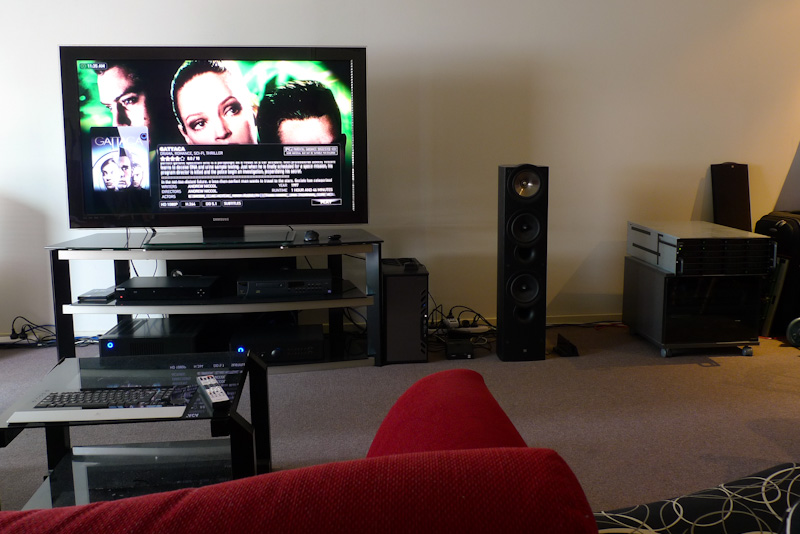 I'd love to see some more pictures, and some drive temperature stats

i was amazed at your power numbers, until i went back reread how many drives you had installed xD

fumino wrote:i was amazed at your power numbers, until i went back reread how many drives you had installed xD

Hehehe sorry guys. I probably won't need to have all bays filled for a few years...

On the power topic, one could go even lower than what I've got, provided you make something less expandable.

I think my base mobo + CPU idle was around 55W. I got this motherboard because it supports 2x PCIex8 and 2x PCIex4 slots, which is pretty hard to find out there. All because I was going to stick 3x AOC-SASLP-MV8s in there running at full speed => they're cheap

But as it is viewed as a "gaming "motherboard, it has a billion power phases for gaming / overclocking nuts, plus a bunch of stuff I don't need, increasing its power draw.

With a less featured mobo (perhaps micro ATX or mini ITX or something) - you would be giving up expandability but in turn lower the power draw (35W?).
It would be even better if there was a mobo that took one of the Core ultra-low-voltage processors (seen generally in ultraportable notebooks), as then it might come down <20W idle. I would always stay away from the anaemic Atom. The ULV processors are so much better.

If you don't need to potentially power 24 drives, you would just use a picoPSU so that you get high AC/DC efficiencies.

So with these it would be cool if it had 8 SATA ports on it, then you might not need to add anything. => very easily you could get 7-8 drives of storage hooked up and get to play with 16-24TB of storage in nice little units.

Otherwise if the mobo has 1 PCIex16 slot and you can use inbuilt graphics, you could throw in a controller like an ARECA ix and hook up the internal drives to it, plus get an external connection to expand it to additional cases of storage all on a *very* meagre power budget. (of course you have to shell out for the ARECA). or get a SAS HBA controller and expander, but then you need at least 2 PCIe slots.

Its unfortunate that the consumer NAS manufacturers don't go down this path and instead charge huge prices for 4 sata ports with a crappy ATOM in it.
And stick in tiny noisy fans.
Top

These were the original 80mm DELTA fans, including the original 80mm fan plane that came with the case.
These are ferocious little fans. I just played with one, plugging it into the PSU while the system was going and it scared the crap of out me as the air pressure moved it across the surface it was sitting on. The noise was tremendous.

The motherboard originally came with water cooling attachments, which I swapped out for the vertical air heatsink for the northbridge (it is connected to the south and the VRMs). The contact with the northbridge heatspreader is not great.

SSD mounted on the side wall with velcro.

This is the intake side of the 120mm fan plan, with the Noctuas soft mounted.

You can see the 3x AOC-SASLP-MV8 here. Something to bear in mind, is they produce a lot of heat. I think this is generally true for both HBA and RAID controllers.

I like your build, very clean. I've been considering a nice solid 2U chassis for my planned linux NAS. Do you have a little rack in your living room, or does the case sit flat on a shelf? I only have experience with desktop cases, so I'm not sure how a rack case would look sitting out in the open.

Would you take a picture of it closed up and in place?
Top

Hello, just joined to applaud this build after seeing it while surfing the web.

Very clean, beautiful layout. Really like the three soft mounted noctuas. Very cool to see a server build on occasion so thanks for sharing!
Top

Very, very, cool, I would have went down this path if i had space in my house for a rack.

Instead I got a guy (Spotswood, he is doing a worklog in the modding section of OCAU) in New Hampshire (i'm in Sydney) to build me a cube that takes dual EATX motherboards/PSU's and 24 disks with the aim of it being pretty quiet (watercooled with dual triple120 rads and 12x120mm fans). I wanted to isolate the disks a little bit to cut down on vibration.

hi!!!i intend on building something like this but can i ask....i was looking at the areca cards but r expensive...when you use 3 cards like yours do you see all the hdd?!!!i will use all the 24 bays an i need raid for that!!can u reply please.thanks mate
Top

You may already know this, but in case you don't... The Norcro 42xx cases (as opposed to the older 40xx) have, in general, better drive trays. One feature of the newer drive trays is a "vent" that can be opened or closed. For any given tray, if you have a drive in there, make sure the vent is open. If have no drive, make sure the vent is closed (so as to not short-circuit airflow).

I don't have a specific link handy, but this has been discussed a few times over on the ServeTheHome forums (if you're not already participating over there).
Top

How do you run your HDDs? Do you run them as JBOD? Or do you have them in hardware RAID? Software RAID?

I'm probably going to need to update my file server sometime in the next year (or whenever spindle hard drive prices come back to reasonable levels). I'm running windows right now, but I've been thinking of going Linux/ZFS RAID6 route. The Linux side scares me, so I'm torn between another windows build or Linux. Any thoughts?
Top
Post Reply
13 posts • Page 1 of 1