For the last 2.5 years I have used an Asus Eeebox (4) Eee Box B202 | N270 | Vertex 32GB) for my daily computing. Over time the fan in that computer has become louder. So it was time to build a more quiet system. When looking at the pile of computer parts I have, I noticed that I didn't even have to buy any new ones. These are the parts I picked:
Partly assembled system (bigger picture): 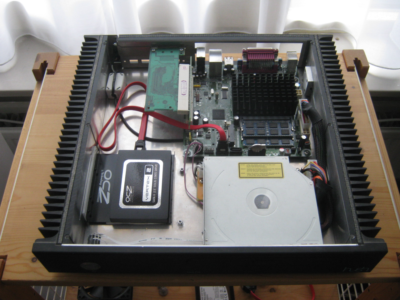 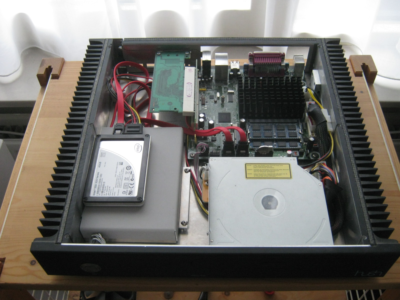 As you might have noticed from the pictures above, there is a big (well for mini-ITX anyway) heatsink attached to the motherboard in a different location than the original VIA boards this case was designed for over 10 years ago. The original cooling solution with an aluminum block and a heatpipe won't fit. So I needed to cut a hole in the top cover and attach a fan to it. Since the heatsink is about 9cm long, I choose a 92mm fan.

Before cutting the aluminum top cover I created a cardboard prototype. After testing the system, I decided to move the fan a little bit forward (bigger picture): 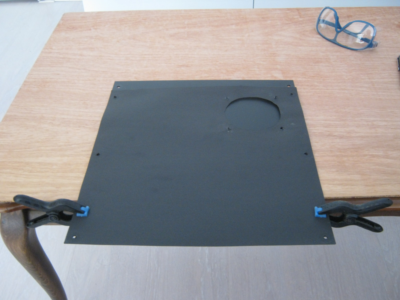 The top cover was too thick to cut with tin snips. So I had to drill a circle of holes and then cut everything out with a dremel. I had enough cutting disks, but not enough drum sander bands to clean up everything. So the out of pocket costs for my "new" computer was a little over €2 for a set of sanding bands. 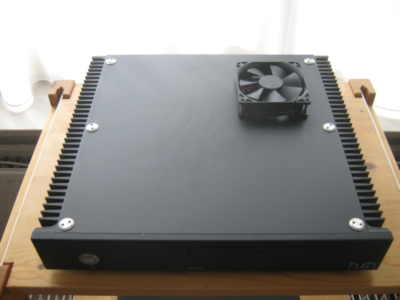 The computer is running Xubuntu 14.04. The system is sitting in a rack below the printer next to my desk. I bridged the network card and the on-board network. Then I plugged the cable from my network printer into the 3C905 network card. This saves me from having to run another long network cable or buying a switch (which power supply would probably occupy another two slots of the power strip).

Too bad you couldn't leave the top panel stock.

I've got a couple of full ATX versions of this case & am considering turning them into audio PCs. I'd like to make new heatblocks to keep using the heatpipes and side heatsinks with newer mobos/cpus. Not sure whether the fanless PSU in them will still work, as their 12V current capacity is not high (as was the norm in those days). One is still running perfectly well, a P4-478 on an FIC board, Windows XP. I recently replaced the lone HDD with an SSD, and aside from a wee bit of squealing from the PSU at very close distance, it's silent. Wondering if this system will run Win7.
Mike Chin, SPCR Editor/Publisher
Support SPCR by buying your gear through this link: Amazon
Top

When it sits on a lower shelve, you don't see the fan. It's still far enough in the back.

I'm afraid that creating new aluminum blocks that actually fit is more than my DIY skills would allow. For this setup I would then also need to move (as in tap new screw holes) the block that attaches the heatpipe to the external heatsink. The groove in the external heatsink would already be long enough to place it anywhere though.

Tibors wrote:When it sits on a lower shelve, you don't see the fan. It's still far enough in the back.

Tibors wrote:I'm afraid that creating new aluminum blocks that actually fit is more than my DIY skills would allow. For this setup I would then also need to move (as in tap new screw holes) the block that attaches the heatpipe to the external heatsink. The groove in the external heatsink would already be long enough to place it anywhere though.

I actually used the existing heatblock (478) for a while on a 775 socket system with a CPU position fairly close to the original. The backplate from a Prolimatech heatsink was used, along with the top mounting bracket/system to sandwich the heatblock , CPU and motherboard between them. The pressure was good enough that I didn't have any cooling issues in normal operation, but I never tried P95. I suspect the fit was probably not quite good enough to keep the CPU cooler under such high load. But that system also got too old...

Tibors wrote:What would you be doing with an audio PC, that would overtax an Intel Atom based mobo? If you use one of those, it would surely not overtax the 12V line of any power supply.

You'd be surprised what kind of system is needed to smoothly navigate some 30,000 titles in a highly graphical interface like JRiver. I haven't tried a recent Atom system for any audio builds, though. so it might be worth a retry. Earlier Atoms were not good enough for me, the menu/screen lags drove me to distraction. My main audio PC is running JRiver in W7 on an i3-2100T CPU w/ 8gb RAM, 120G SSD & 1.5TB laptop drive (don't recall which) in a Silverstone ML05, power from a Silverstone 300W SFX whose fan rarely spins up. Works very nicely.
Mike Chin, SPCR Editor/Publisher
Support SPCR by buying your gear through this link: Amazon
Top
Post Reply
4 posts • Page 1 of 1