Note: I posted something similar over on Serve The Home, but have edited the content to be more SPCR specific.

I recently rebuilt my home server. Original build log (with pics) here: U-NAS NSC-800, E3-1230v3, E3C224D4I, 2xSSD. (Somewhere here in the SPCR Forums are build logs of even earlier iterations of this server (completely different hardware of course).) There seem to be a few other people using that U-NAS NSC-800 case. While it's wonderfully compact, it has a couple problems resulting from its size: It seems technology has progressed faster than my needs (finally). In particular, on the storage front: I was previously using: That made for eight total drives. That required me to use an additional HBA (only six SATA ports on the motherboard), and have six (or more) 3.5" hotswap bays on the chassis. I found I was only using about 5 TB of the 5x3TB array. So I cut that down two HGST He8 8TB drives in RAID-1. That brought the total drive count down to five, only three of which were big 3.5" drives. It also allowed me to remove the HBA I was using, and get away with only the motherboard SATA ports (saving a bit more electricity and heat).

Reducing the required hotswap bay count opened up more options for small cases. I went with the iStarUSA S-35-DE5. I had previously used a variation of this case, the S-35-DE1 (only three hotswap bays), in a build for my parents. The S-35 case in general is "modular" in that the space for hotswap bays is actually just three generic 5.25" slots, so it will work with any number of X-in-3 units. I believe this current config will tide me over long enough until SSD prices are low enough to retire all 3.5" spinning drives. And then I can get a new multiple 2.5" drive module to fit in this space.

Giving up the hotswap bays bought me a lot more room for a bigger CPU cooler. Based on the SilentPCReview article, I went with the Scythe Kotetsu SCKTT-1000.

With the new CPU cooler in place, I was able to re-enable all four cores and turbo boost. Results: The 5-in-3 hotswap module that comes with the S-35-DE5 has a built-in 80mm fan. I removed it to make room for the 120mm fan on the CPU heatsink. You can see, if I really wanted to get crazy with cooling, I could add another 120mm fan to the heatsink. Also, the layout screams ducting: I think if I built a duct that covered the sides and top from the hotswap module to the back of the case, I'd see still more cooling efficiency... but as you can see from the results above, things are great as-is.

That said, anyone doing DIY ducting in their systems? If so, what material are you using? Cardboard is quick and easy, but doesn't "feel" right.

Additional thoughts for SPCR readers: this system lives in a closet in the basement, so silence isn't one of the primary goals. And right now, it's not particularly quiet, as I have both fans set to max. However, I think it would be trivial to make this very quiet, if not silent (even by SPCR standards) with a little more work. Use three high-quality fans: two on the heat sink, and one in the back of the case. Set the fans to scale with temp/load, and get fans that max out at an acceptable SPL level. Add a duct. The truly enterprising could even make the back fan cutout bigger and use a 140mm fan (see comments below). Doing all that would put a lot of CPU power and storage potential in a very small and quiet space: perfect for a home or small office where there's no dedicated server space.

I do have a couple gripes with this case: I will try to remember to post graphs from Munin, that show the temperature differences.

Also, I need to connect this to a Kill-a-Watt to see how much electricity it's using. (Going from memory, the system previously idled around 70 watts; I'm hoping the rebuild gets below 50.)

On to the pics! Click on thumbnail for bigger picture.

Here's the right side profile shot: 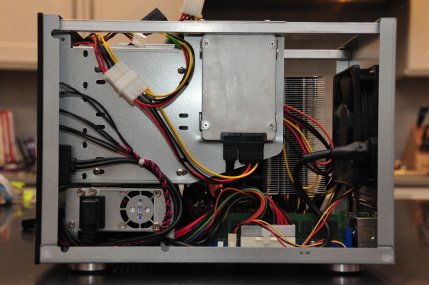 Here's the left side profile shot: 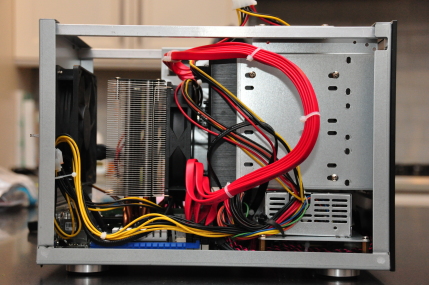 Bird's eye view. As I mentioned above, the second 2.5 SSD is actually floating on top. The SATA cables tuck in nicely when the outer shell is put in place. 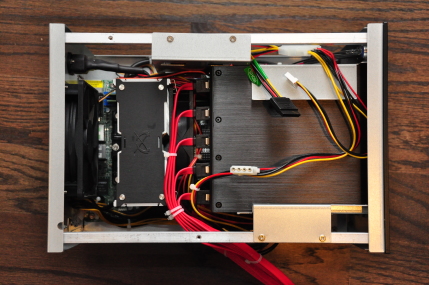 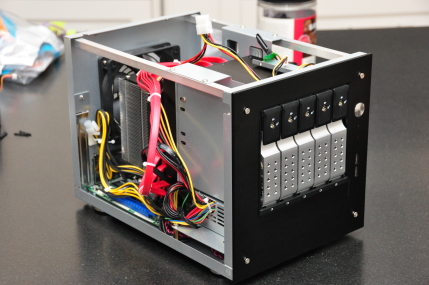 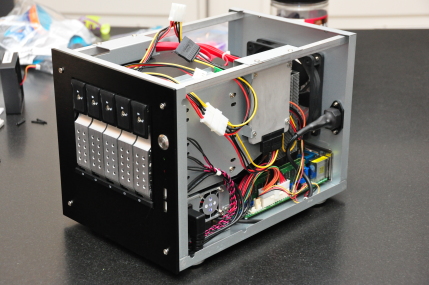 How is the flex atx psu doing in term of noise?

Rest looks great tbh, just put in some fan control and you are done. Dual fan is excessive on most heatsink.
Top

baii wrote:How is the flex atx psu doing in term of noise?

With the old 1U power supply, there was a manufacturer's note that said something to the effect of: "During operation, if the PSU is under 50% load, the fan will not turn on. This is not a flaw but design intent." And indeed I observed that exactly, so the 1U PSU was "semi-passive", and in my particular case, literally passive since I never pulled anywhere near even half its capacity.

I didn't see such a notice with the FlexATX PSU, but I have a hunch it's the same or similar behavior. I didn't hear the PSU fan when I powered on the system, but to be honest, I forgot to check. Eventually, I'll open it up again to mess with the big fans and ducting, and I'll try to remember to check if the PSU fan even starts up.

I'm starting to think the same, although if I add a duct as well, it seems like more fans will create more front-to-back airflow. Maybe?
Top
Post Reply
3 posts • Page 1 of 1