Oil Spill in the Gulf of Mexico - Historic Disaster

If the US's insatiable thirst for oil (not disputed) is such an important factor in the spill then why aren't all the other oil companies having the same problem?

Companies cut corners with or without insatiable countries. And I would think we may a law or 2 on the books that have not been enforced (way to copy W there Obama) that would clearly define what they did as intentional negligence. But then Obama could be accused of the same thing, which is probably why he's posturing so much as of late.

The NYT writes today how the Halliburton contractors were none too happy with BP's methods. And there's OSHA's damning record/history of BP's violations which happened completely under the current guy's watch, whatever the hell his name is. You would have thought having so many violations would have led to greater than average scrutiny, not turning 2 totally blind eyes.

Basically it all boils down to this; this is what happens when you don't put people (safety) first. You endanger those on the rig, you endanger everyone trying to make a living from those waters, you endanger everyone who's going to be foolish enough one day to eat from those waters, you basically shoot all of civilization in the foot. The really telling aspect of greed here is to list the amount of money they saved by cutting corners versus what they will spend trying to repair. And you would have thought the Exxon Valdez would have been a large enough and recent enough example of what not to do, but nooooOOOOOoooOOOOoooo.

Also recently in the NYT some African country that looks at our leak with amazement it's being addressed while their leaks (BP, Shell, and others) nobody gives a shit about. And those leaks are about the same magnitude. Same old story, money talks and all else walks.

Update to a recent phrase - you can't regulate stupid.
Top


Simply, because BP were unlucky. Someone has to be first.
They all cut corners, they all wing it from time to time, it's just that in this case BP came unstuck because several things went wrong at the same time.
I'd bet that the first thought going through the minds of the CEO's of those other oil companies after this event was "phew, thank fuck it wasn't us".
This is the wake up call for them all, the disaster that "couldn't happen"
They will all be doing it by the book now because the financial consequences of this kind of mishap are too great.

Incidentally, I was not saying that the US demand for oil was a factor in this incident, just that it was the reason why there was any deepwater drilling going on in the first place.
Top

judge56988 wrote:Simply, because BP were unlucky.

Like the Godfather, I am a very superstitious man, and I don't believe that companies have unlucky accidents.
Top

http://money.cnn.com/2010/06/11/news/co ... m[quote]As of the end of last year, there were 35 drilling vessels operating in the deep waters of the Gulf, and there are at least 18 deepwater prospects that could be developed over the next few years, according to Douglas Westwood.[/quote] 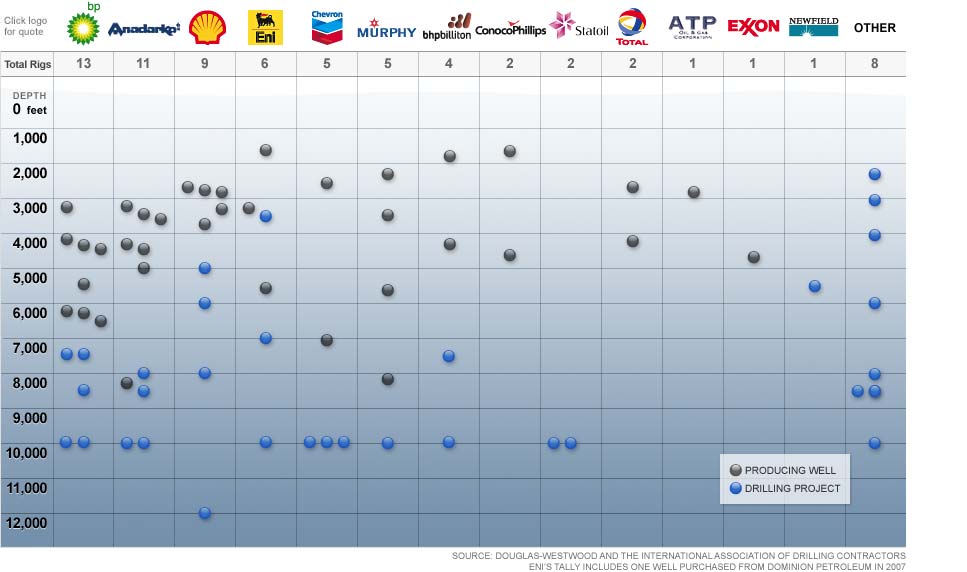 I think I will be buying from Exxon and Chevron when given a choice.
Top

[EDIT : The article is not very thorough nor very researched; maybe it's just speculation, maybe not. ]
Top


Simply, because BP were unlucky.

No it's much more than that, see the recent Rolling Stone issue on specifics. BP has a long history (in the US) of problems, ie actual violations. They should have been the last company on earth to have such drilling approved. The article includes what many should already be aware of. Obama was aware of the corruption and problems of the MMS and appointed a pro-oil numbnuts to clean the place up, which of course he didn't.

Obama parallels Bush in so many ways:

1. Lets oil companies run amock, calling their own shots if and when they feel like it.

2. Bush came into office knowing national security was a problem. 9 months later we have 9/11. What was done the first 8 months? Perhaps Jack Shit? 8 years later Obama gets the office knowing MMS is a mess, how is it corrected? It's not, and now we have an on going oil spill.

3. Bush yelled, "You're doing a helluva job Brownie." Obama says the same thing about his useless stooge. What's the difference?

And where's Cheney during all this? He was the big pro oil guy, giving billions away for more drilling to the most profitable corporations on earth.
Not one peep out of the chicken hawk's mouth.

What did BP learn from this?
http://en.wikipedia.org/wiki/Prudhoe_Bay_oil_spill
Thanks to GWB they got a $20 million slap on the wrist, compared to the original amount.


In September 1999, one of BPâ€™s US subsidiaries, BP Exploration Alaska (BPXA), agreed to resolve charges related to the illegal dumping of hazardous wastes on the Alaska North Slope, for $22 million.

Thats why i posted it.

its just like ronnie prophesied, " the new world order".
Top

Slowly the odds are changing, and WW III will be fought with tar balls.
Top

THEY HAVE STOPPED THE OIL SPEW!

It may only be temporary -- they are testing to see what happens inside the well. If there is damage, and it starts leaking, they will have to open the valves again to keep the ground from eroding and collapsing; which would be a horrible outcome.

So, keep your fingers crossed! They might be able to cap this thing...
Top

And yet, somehow, it just doesn't seem any less slimey.
Top

compaies do not step up half assed to dump millions of gallons into the ocean.

I would not be surprised if they find a fracture in the bedrock, and conclude this was a natural event.

haiti is right down the road with a chunk of itself sunk in the ocean....

I am in maine and could swear a california reverberation.

this big conversation over a tiny planet is getting to be ridiculous. the icleand volcano, now washington with a 3.6... something rare is on the move.
if is apocalyptic... hope you are blessed to get out of the way ahead or live with yourself...the person that did not. I know where the real bullshit is...
Top

There is seepage detected near the BP oil well:

This could be a very bad thing -- seepage can become a flow, and a flow can become a torrent, and that would erode the sea floor and possible cause it to collapse. Or at the very least, it would start leaking from a place that would be impossible to control...
Top

Sigh .. when will we learn?

It's just a small point but... dead people don't usually 'hang on' to their rescuer.....

You could be right, but it is hard to see if the person carrying the oil covered person is holding on? Or maybe rigor mortis has set in?
Top

Re: Oil Spill in the Gulf of Mexico - Historic Disaster

This is the one year anniversary of the BP oil blowout, in the Gulf of Mexico.
Top
Post Reply
227 posts