by xen
So I am trying to create a digital circuit for a certain standby-killer purpose.

This is a Goobay wireless AC switch: 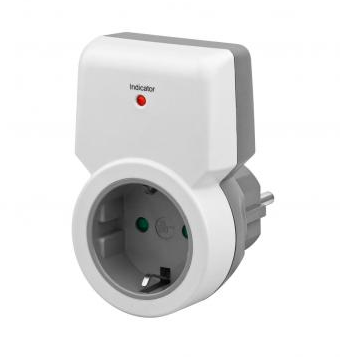 I won't show the remote, too much trouble.

The idea is two of these things on top of each other.

The regular one would switch off the mains to the other one, in other words:

If the appliance should draw less than 5W, a circuit should activate that will activate the transmitter, that will cause the receiver below to switch off.

In other words I am trying to modify a defunct receiver/switch to become a standbykiller/transmitter with different components inside :p.

So I am reusing the housing of the unit you see above, so to speak

But my electrical skills are severely limited so I am trying to paint a picture of how this should be done.

by xen
I am trying to create an electrical diagram of what I know, so bear with me...

I will edit this post to include the image later okay.

The problem is that I want to use a capacitor to delay the activation of the circuit, but because of the high resistances involved there may not be enough current to trigger the gates.

That is a recurring problem in my schematic :p. 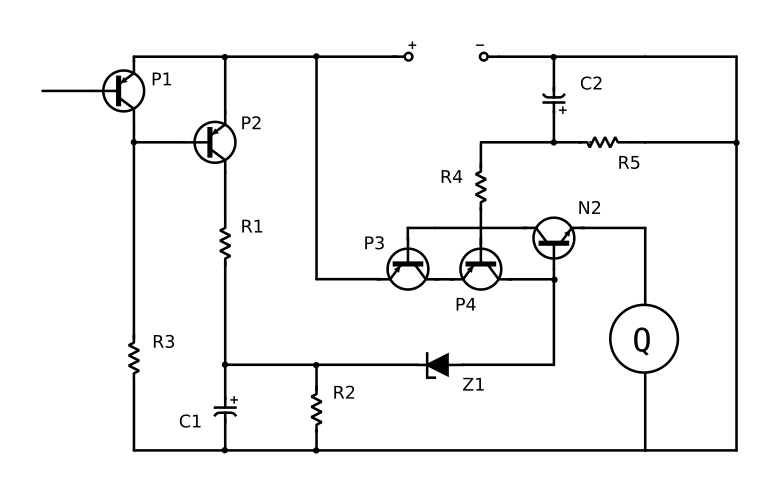 The numbers aren't there yet but this is a 12V circuit.

P1 starts flowing as soon as its base is connected (closed).

If P1 doesn't flow then P2 is open because it offloads some current through its base through R3 and into ground.

So what is it? It is a circuit that is activated when a certain voltage is not there, in other words when the main load of the system (not shown) draws very little energy. Load Q is a transmitter that will shut off a relay that powers the whole thing.

As soon as P2 is open C1 will start accumulating charge (voltage) until it reaches a certain amount equal to Z1. At that point a little bit of voltage (and current) will get into N2, probably enough to trigger it because N2 should block if it can't open its gate.

(Of course in electronics that is called closing a circuit).

As current flows through P3 into its base, it will also flow into P4. P4 then opens (closes) because it can offload about 10µA through R4 and R5, and more through R4 and into C2. (I assume the voltage drop would be 12V for R4 and so would take at least 52 µA at the designated ohmage). The gate has an ampliciation factor of 190 at 53µA and would yield some 10mA through the gate).

Because P4 "opens" 12V now arrives at the base of 'gate' N2. This will throw it wide open (if it wasn't already) and all parts of that picture are now saturated with 12V until C2 also becomes saturated with some 11V.

Because R5 > R4 (at least 4 x greater) current accumulates in C2 and doesn't flow out R5 so easily.

As C2 fills up the base of P4 saturates with 12V and closes it. (Actually just 11V but that is enough).

By closing P4 the feedback loop to N2 stops. Unfortunately C1 is now also saturated with 12V and will take so long to drain

, that C2 will have drained before it through R5 :p. Which would activate the cycle again and it would never stop :p.

All it needs though is a forward diode at Z1 to stop the current from flowing there. The voltage at the base of N2 should then quickly dissipate to Q. However all of this won't work probably :p.

What I really think will happen though is that P3 and N2 will keep each other in an equilibrium where the actual voltage is 11.4V after P3, at the base of N2, and at Q. How well it will conduct I do not know :p.

So, not as certain as I thought I would be :p.

by CA_Steve
Don't know if this applies - but there are master/slave power strips. When the master device powers down/goes to sleep, the slaves are all turned off. Here's one example. My UPS also has master/slave functionality. I use it to control the stereo amp that's connected to my PC.

by xen
Thank you for your reply.

I don't have a computer I can turn off so that the monitor will also go off, that is all. This monitor, I turn it off in isolation and also it goes into standby in isolation.
All times are UTC-08:00
Page 1 of 1