Got a shopping cart of parts that you want opinions on? Get advice from members on your planned or existing system (or upgrade).

After a whole weekend of researching a mini-ITX new build for my wife, I've settled on the following choices and wanted some feedback and some questions answered:

Case: Lian Li PC-Q08b - large for mITX but prefer the airflow and HDD swapping ease cf. smaller mITX cases like Sugo 05. Prodigy was just too big/tall.
PSU: Seasonic G360
Mobo: Asrock B85m-ITX (=cheapest Haswell mITX mobo I can find)
CPU: i5-4570 (I'm guessing that the lower-voltage CPUs are a waste of time?)
CPU cooler: Samurai ZZ
CPU fan: I think I have an old Nexus 92 lying around
GPU: Was planning on relying on HD4600 IGP. No gaming requirements, only photo editing / Lightroom etc
RAM: A single 8GB DDR3-1333 stick, so that I have an easy upgrade option if need be
DVD: An old (SATA) one from her current Dell PC
HDD: Her current SSD + one 3.5" 1.5TB

Questions:
1. Is the 360W PSU powerful enough for the 84W Haswell chip, the optical drive, one SSD, *two* 3.5" HDDs (in case of HDD upgrades --> needing to transfer), and *potentially* a low-mid range graphics card, were I to install one later?
2. Will PSU fit OK above the Samurai?
3. Do you think I could use airflow from the PSU to cool the Samurai passively, and omit the Samurai's fan?

as530 wrote:1. Is the 360W PSU powerful enough for the 84W Haswell chip, the optical drive, one SSD, *two* 3.5" HDDs (in case of HDD upgrades --> needing to transfer), and *potentially* a low-mid range graphics card, were I to install one later?

No problem, The system should draw no more than 100W in extreme burn mode. Even a higer end model like the 770 GTX or 7950 shouldn't be a problem electrically without overclocking.

Yes, the cooler was used in the review of the case.

as530 wrote:3. Do you think I could use airflow from the PSU to cool the Samurai passively, and omit the Samurai's fan?

The Samurai without fan is not very tall, it would sit quite far from the PSU fan. It might still work, but I would recommend you keep the fan or install a taller cooler. The Noctua NH-C14 is prety expensive, but it comes with two good fans. Without the top fan it should fit underneath the PSU and you can use the fan instead of the case's top fan. For a low cost solution stick with the Samurai, it will be fine with the fan at 7V or the Nexus fan.
Lian Li V600, Asus P77Z-M Pro, i5-3570K 4.4GHz with Scythe Orochi, 140mm Slipstream 500RPM and Mugen2 115X Bolt through kit, Evga GTX 970 Superclocked, BeQuiet E9 580W CM
Top

You will have to get a little creative with the G360 + GPU, as its not modular and no place to hide cables, it can be done just you will need to put some effort into cable management.

Another case to look for is Fractal Design Node 304 $70 free shipping, also a form factor itx case, that can fit up to 6 mechanical hdds and can hold a standard ATX PSU, imo better layout as you can fit tower cooler, you could fit a very tall heatsink, and while it doesn't have any cable management holes, it can manage it better depending on hdds/gpu as there is some pace left where the psu is installed. You can also add a gpu later on also, depending on the length of it you might need to remove 2 hdds (end up with 4).

What you save from the case i would invest it on a better motherboard, like ASUS H87I-PLUS, comes with fanXpert so you should get good control on your fans. It also has the same layout of the cpu like the ASUS P8Z77-I Deluxe, commonly used on PRODIDY builds, in those builds they are able to fit twin tower coolers, so the CPU position is very important, and this being the same should allow you pratically any cooler on the NODE 304, as long as clear the hdds you are planning, im sure a cheap cooler like Coolermster 212 EVO should fit fine (again the fan and hdds whats important, i mean the cables but its very likely to), search google for builds im sure you will get a better idea if what you want can be done with it.

I'll leave you a picture so you get an idea of what the case can hold, 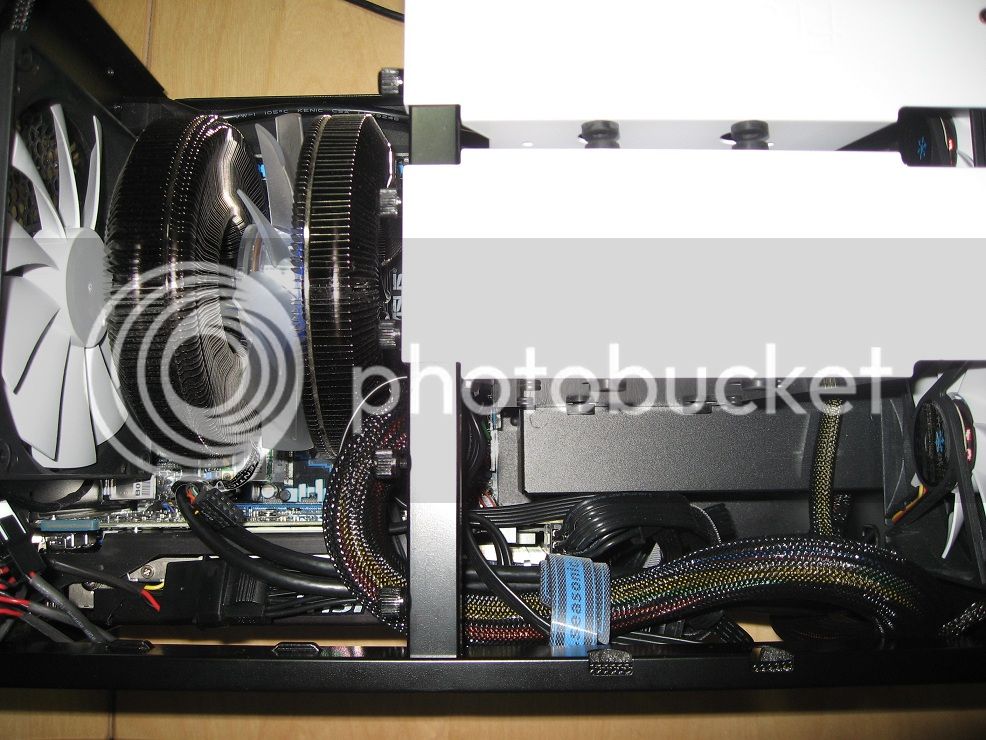 Thanks boost for the answers, very reassuring.

as530 wrote:Are there are any other major disadvantages to the Asrock b85m-itx, other than fan control? Would it not have some sort of intelligent fan control in the BIOS? If not, would it be possible to use Speedfan with that motherboard to dynamically control case and CPU fans?

I know very little on AsRock, i done a couple of builds for friends in the past, but they were not silent seekers, so never even bothered with bios fan control, they always use their fans at 12V. My experience with other motherboards in bios isnt that great either, Asus didnt allow me drop my Noiseblockers PLPS below 950rpm in both GENE IV n GENE VI (with fanXpert2 i can go to 650rpms), on my supermicro server board..... it was a mess, on paper was ubber, like intel motherboards it could drop scythe fans to its lowest, but the joy only lasted 10sec, suddenly the fans ramp up to 1600rpm, and then down to 300rpm and endless loop, like if it was breathing but very loud.... it was more an issue with supermicro bios that as soon as it saw them dropping low it panic and increase the voltage to 12v and so on, i msg supermicro and they offer a fix on a future bios that i just couldnt wait, so went with quiet 3pin fans. On Intel i have very good experience, their bios while not that tweakable, they can drop scythe fans like slisptream and kamaflex2 pwm fans to their lowest (250 to 300rpm on pure bios), you can check my htpcmi build where i use 5x kamaflex2 and have them running at 300rpm.

Now speedfan, i never been very keen on it, some motherboards work great but in some.... a sensor it not recognized... and had bad experiences that i never could do it the way i wanted, then again im not very patient on noise, so it either works or not.... so if you have good experiences and know that asrock sensor will be recognized on the latest speedfan version and that you will be able to control the 3pin fans on the Q08, then go for it. I just like more knowing that ill be able to control my fans with fanXpert2, the motherboard that i linked i believe only comes with fanxpert, not sure though, not that many info out about it, but on my GENE VI im really happy, it can control my 3pin case fan to 430rpm where its inaudible and the 4pin fans (noiseblockers PLPS) to 650rpm, where no bios was able to drop it.

Ah yes cable management, the fun begins when everything works, but nothing fits. I have a modular PSU, but it has disadvantages, too.
For a minimalist system like you're planning, cable management has clear advantages. Only two cable to the mainboard and one for the drives. Only the main board power cable is very stiff and made for a far larger case. And the plugs for the cables add to the overall length of a PSU that is already 160mm deep (all other* modular PSUs are at least a deep).
As soon as you upgrade your graphics card (one more cable) and add more drives (one more cable) the situation is worse, all cables are made for larger cases.
I'm no longer as sure as I was before I built my current system I would recommend 160mm modular PSU over 140mm fixed one. Minimal built slightly in favor, upgraded built not a clear picture, more a matter of personal preference. And btw never ever lose the cables!

*Only Silverstone has two modular PSUs 140mm deep, but they aren't spcr reviewed an no other review goes into any detail concerning noise level so no recommendation here (550W model is electrically good). They even have *gasp* a short cable set. I couldn't get an extra cable for my Seasonic at any etailer.
Lian Li V600, Asus P77Z-M Pro, i5-3570K 4.4GHz with Scythe Orochi, 140mm Slipstream 500RPM and Mugen2 115X Bolt through kit, Evga GTX 970 Superclocked, BeQuiet E9 580W CM
Top

merlin wrote:*Only Silverstone has two modular PSUs 140mm deep, but they aren't spcr reviewed an no other review goes into any detail concerning noise level so no recommendation here (550W model is electrically good). They even have *gasp* a short cable set. I couldn't get an extra cable for my Seasonic at any etailer.

The silverstone 140mm modular PSUs are said to be somewhat noisy, based on user review of other forum users (presumably less noise conscious). You might want to look into a quiet SFX PSU or even a picoPSU. 300W is probably overkill for your specific build.
Top