by Edward Ng
Unholy and skewed, but nonetheless, it does fit. 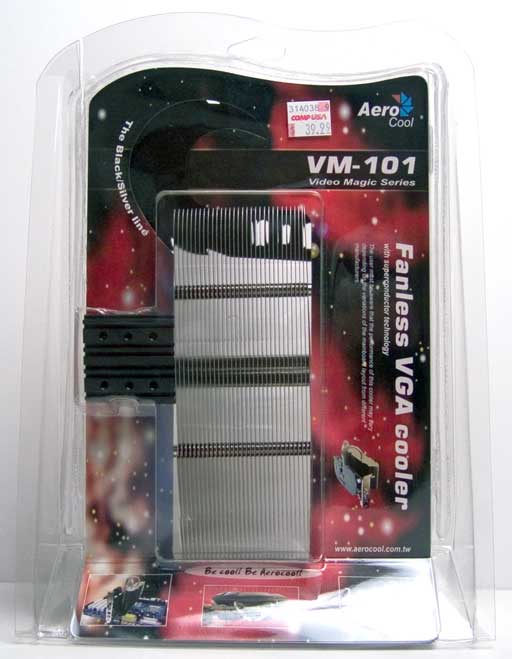 The box.
The usual obnoxious hard plastic blister wrap that neither helps Mother Earth nor makes things any more pleasant when it comes time to open the thing up and install it. Lesson learned: Right hand + green tin snips = blister wrap no more. 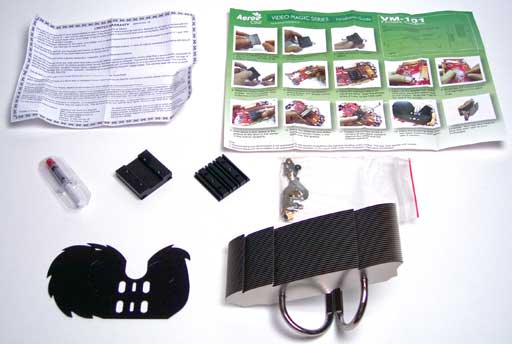 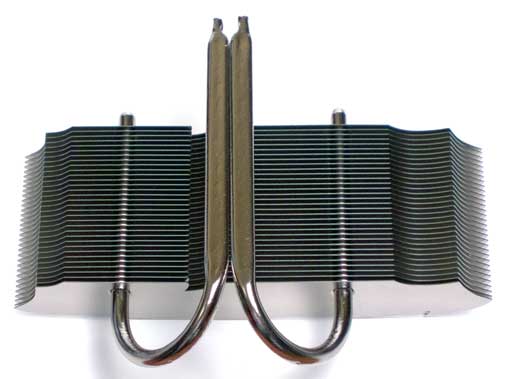 The main attraction.
Two ~1/4" diameter heatpipes transport heat away from the VPU/GPU to an array of tightly assembled, very thin aluminum fins, not unlike the design of Thermalright's XP-90 and XP-120 coolers. 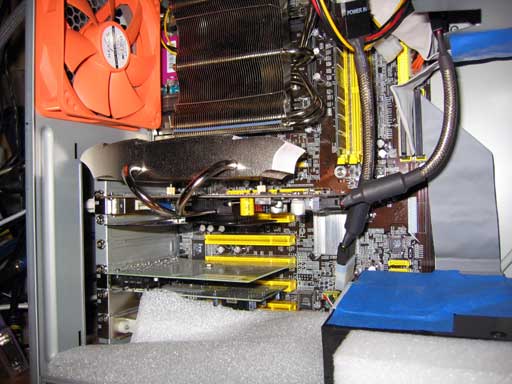 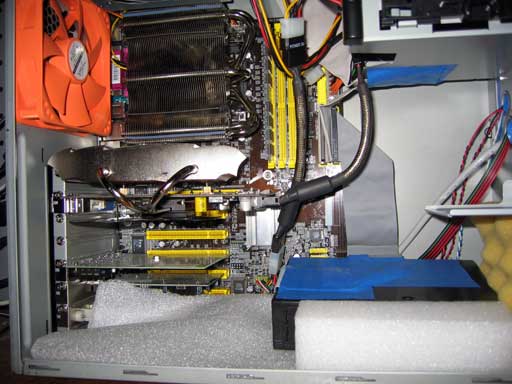 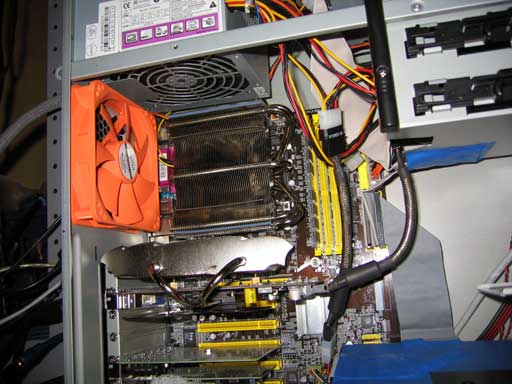 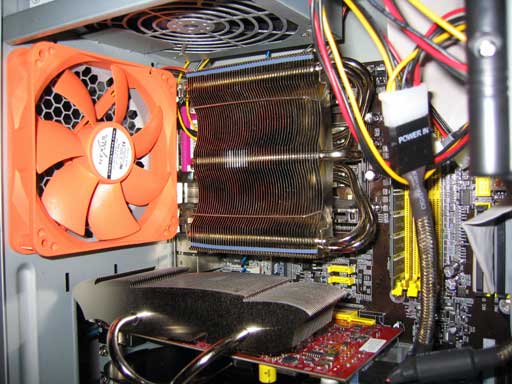 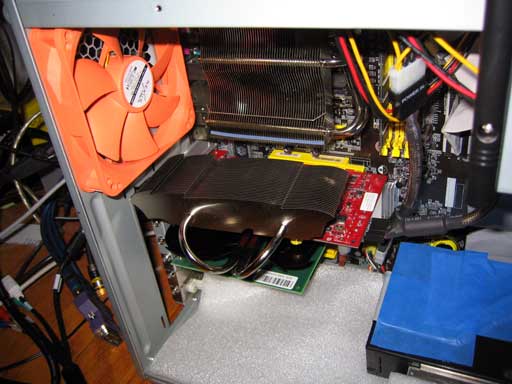 The system runs pretty much as pictured, except with the side panel on; there's an intake duct built into the side panel. All openings in the entire case are taped off with blue masking tape except for the side duct and that vertical opening in the back, where the expansion cards are screwed down. The side duct acts as an intake for the XP-120 while the opening in the rear acts as an intake for the VM-101.

I have been running RTHDRIBL for the last three hours straight without a hitch, and because the only possible source of noise in the entire system are two very smooth 120mm fans spinning at under 650rpm, the system is virtually dead silent in all but the most extreme of low ambients. I am more than satisfied with this build, and will be writing a fully detailed DIY article on it.

by trodas
Amazing - not fanless, but close enough!

...more informations about used videocard and temperatures won't hurt - the temps can't be low (read, comparable to normal NOISY cooling), however as long as things don'r overheat dangerously - hell - this is a GOOD thing!

by Edward Ng
No temperature report is showing up in my control panel for this card.

I did a touch test early on in the testing last night on the sink and it was only luke warm but I'll have to try another temp. check tonight after several hours of RTHDRIBL to be sure; I'll use the multimeter/thermometer.

-Ed
by trodas
Amazing - not fanless, but close enough!

...more informations about used videocard and temperatures (CPU/GPU/chipset on iddle/under load) won't hurt - the temps can't be low (read, comparable to normal NOISY cooling), however as long as things don'r overheat dangerously - hell - this is a GOOD thing!

PS. shame on MSI, that their 6600GT did not report temperature

by Edward Ng
If I knew this card didn't report temps, I would've chosen another card.
by Likif
I got the cheapskate Club3d 6600GT AGP card, it reports temps , so the MSI should too, well, it ought to.

How toasty will it get after extended session of CPUBurn&3DMark? (actually, AtiTool has a quite nice burn mode which displays a spinning cube on the desktop (if it just works with nVidia))

How cool does it run idle (assuming You use CrystalCPUID (similar))?

Wasn't there a on-board fan control for the case fan? (In the other thread) Or was it just on/off?

Jan
by Edward Ng
Haven't had the chance to do more extensive tests, but it's run 100% rock solid stable so far and I've been doing things like RTHDRIBL and SW: Battlefront.

The fan speed is software controlled; I had it set up activate the case fan when CPU temp hit 55C and the way it was ramping, it would rise as high as ~700rpm, when the CPU was around 62C. I've since figured that if 600rpm isn't audible anyway, why not just leave it there? So I did; the PSU and case fan are both set to remain at ~625rpm.

So far, so good. I'll try to get some more exact figures later tonight.

-Ed
by dentaku
At first I had my doubts that the heatsink would fit under my CPU cooler http://www.zalmanusa.com/usa/product/vi ... ode=005009 so I opend up my case and saw that it would probably not be a problem because the AGP and CPU are quite far apart on an Asus P4C800-E Deluxe but I DID notice that my motherboard chipset has a large heatsink that would get in the way for sure.
by Edward Ng
The heatpipes are pretty long, making for a decent amount of in/out adjustability. This is how I managed to clear the XP-120; XP-120 is taller than the cooler on your mainboard, so you would be fine (at least on the VM-101; not sure if XP-120 would clear the northbridge sink, though).

-Ed
by tay
That is a sweet build Ed

I remember thinking about how good the design was when the VM-101 came out.
by josephclemente
How stable is this heatsink over the GPU core? Any chance of tilting while handling?
by Edward Ng
I recommend being really gentle with the whole thing once it's put together.

The way the clips are, the arms are free to rotate and slide in their slots, so the cooler itelf can shift if handled without care. I took advantage of this to get the sink in just the right position after installing the card in the slot, but it can be weird when getting the card in; I recommend handling the card on its edges rather than trying to handle it all by the sink or shield plate.

-Ed
by Trip
Why the ST400 rather than the ST300? The reason I ask is I thought the ST300's fan was quieter (slower?) though they both use the same Yate Loon fan, don't they?

I imagine the ST400 components can take a little more heat and the fan won't ramp up as quickly. For some reason I was thinking the ST400 fan was louder though...

The system doesn't need extra power. Ideally would an ST300 be as good or better (quieter)?

Edward Ng wrote:The heatpipes are pretty long, making for a decent amount of in/out adjustability. This is how I managed to clear the XP-120; XP-120 is taller than the cooler on your mainboard, so you would be fine (at least on the VM-101; not sure if XP-120 would clear the northbridge sink, though).

Any thoughts?
by Edward Ng

Edward Ng wrote:The heatpipes are pretty long, making for a decent amount of in/out adjustability. This is how I managed to clear the XP-120; XP-120 is taller than the cooler on your mainboard, so you would be fine (at least on the VM-101; not sure if XP-120 would clear the northbridge sink, though).

Yep.
by josephclemente
I picked up one of these VM-101 coolers for my ATI X700 Pro 256MB card. Installation was very easy an much less complicated than a Zalman ZM80D-HP. Also, it uses so much less thermal compound - a much cleaner installation.

There was one small snag with this particular video card which I fixed. There is a surface mount component located very close to a mounting hole, which will keep one of the slider arms raised when mounted. A simple filing is needed for this slider and all is fine.

I like the way the heatpipes move all of the heat right over the video card, where system fans keep air circulated. In comparison, the Zalman keeps a large amount of heat below the video card.

One thing strange about the VM-101 is the black "shielding plate". It doesn't seem to serve any purpose other than decorative. Also, it seems like the base heatsink is just a few millimeters tall enough to prevent use of a slot below. I think this could have been designed to preserve use of that slot.

So far so good. I must have missed the reviews raving about the VM-101 but Edward Ng's post made me look again. Thanks!
by Edward Ng
No prob.
by Simonbun
I take it the VM-101 is not usable with a lian-li v1100 with its inverted setup?

Heatpipes don't work well when they're upside down i've read somewhere...probably around these forums :p

But when i look at the XP-120, that has heatpipes too and in fact 2 of them are always inverted...

Does anyone have real world experience with upside-down heatpipes and their thermal performance?

Thanks!
by Trip
I don't think orientation always has a significant impact. Be sure to read the review of the XP-120. Ralf found no performance difference among the various orientations.
by Simonbun
Indeed thats why i gave the xp120 as example.

Yet zalman's site used to say that you couldn't use their heatpipe vga cooler in an inverted case like the lian-li's...

"If it is set up in such a way that the video card's GPU faces upwards, then this product cannot be used. Also, if you attempt to adjust the positioning of the computer by flipping it in a reverse direction, the product will not function properly either, so you should place your computer case in its normal position."

by freshjuice
I just got the MSI GT6600 AGP for my new rig along with the VM-101... however, when I looked at it in relation to the XP-90 heatsink for the board, I got concerned that there won't be enough clearance. They look like they'll be very close to touching. I suppose if I oriented the XP-90 sink towards the top, that might help. What say ye?
[Edit }

I'm going to answer my own question...hopefully it will help someone else.

The answer is no--at least not easily. Even with the XP-90 pointed up arching over the memory, the VM-101 will contact the cooling tubes of the XP 90.

I'm going to try and tilt it a bit and also extend it further away from the card and see it that helps.
by josephclemente
My ATI X700 Pro with VM-101 has been working great.

I don't mind the heat of the heatsink fins, but after stressing the video I realised the circuit board of the X700 gets VERY hot to the touch. The thought of the RAM and every other component getting as hot as the circuit board does not sound good to me.

I tried resting an 80mm fan (blowing up at 5V, taking care the blades won't touch) on the VM-101 and it made a dramatic difference on temperature. I felt the top of my aluminum Wavemaster get warm, however.

I am thinking about constructing a duct from the VM-101 to the rear case fan.

Edward Ng - have you tried anything to optimise the cooling of your VM-101 or are the case fans doing enough without further mods?
by Edward Ng
Seems there is sufficient flow as it is from leaving that slot open next to my expansion slots, in combination with the exhaust fan and PSU fan. Had I chosen to seal off the slot next to the expansion slots, I'm pretty sure temps would be higher.

-Ed
by freshjuice
The XP-90 + VM101 on the GT6600 i nthe MSI Neo2 Platinum worked fine. I just needed to push the fins a little further away from the board. THat allowed space for the Xp-90.

The nice thing is, with my 3000B Antec case, the 120mm exhaust fan is right where the VM-101 grates are, so it just sucks the heat right out.

by Qwertyiopisme
There are two different types of heatpipes, one (the type used in ZMHP80A/C/D coolers) are a hollow pipe with liquid, and gravity gets the liqiuid back to the bottom after in condenses, wheras the XP-120 for instance, has a wick that pulls the liquid back up, which means that is can work independant of graivty and rotation.
All times are UTC-08:00
Page 1 of 3