So, I installed a Thermalright Ultra 120 Extreme in my machine. My CPU is running a good ten degrees cooler, and with one less fan in my machine. Great!

However, my north bridge chipset is now getting very hot (63 degrees C!!). Previously it was under fifty.

This is the second time I've installed a CPU cooler without a fan, which has resulted in the chipset getting extra hot. Seems that the vertically facing fans on the stock coolers have the side effect of cooling the northbridge too.

Is this a common problem? How do most people solve it?
Top

By using larger NB heatsinks and/or directing more airflow around them.

You may want to try rigging up some ducting to see if you can increase directional airflow around the NB.

However, my northbridge chipset is now getting very hot (63 degrees C!!).

63C is fine for a chipset. most of these are rated to 100C. if your system is stable then there's no problem.
[size=75]JFK:
What do our opponents mean when they apply to us the label "Liberal?" If by "Liberal" they mean...someone who looks ahead, who welcomes new ideas without rigid reactions,who cares about the welfare of the people, who believes we can break through the stalemate and suspicions that grip us in our policies abroad...then I'm proud to say I'm a "Liberal."[/size]
Top

Yeah, it's always been a thought that top-down heatsinks (like the standard Intel and AMD ones) do an excellent job cooling both the Northbridge and any VRM components around the socket. In fact, Intel guidance states that top-down airflow is a necessity.

In having many machines with tower heatsinks (Like the Ninja and your TRUE) both overclocked and not, I can say that components definitely do get hotter when running towers, especially when they are low-airflow, but as the poster above me said, most chipsets are designed to work all the way up to 100C. If you're going for an overclock or something you may want to put some ducting or otherwise improve the airflow of your case, but for nearly all uses your chipset should be fine.
Top

Thanks for the reassurance folks.

I played around with a few different fan locations, and I'll probably install another quiet fan in there anyway just to get a bit of airflow over the chipset anyway, for my piece of mind.
Top

With my P182 case I think the 120mm fan I fitted to the location at the back of the upper HDD cage to help cool the passive graphics card is in a nice flowline with the rear fan, N Bridge piggy in the middle.

If you don't mind spending $30 or so, you can get one of the Thermalright HR-05 variants to replace your NB heatsink. I put one in on my i975Xa-YDG and it works great.

Yeah.. on my first PC with the toasty chipset, I bought a Zalmann heatsink which, while much larger than the factory one, still got to the same temperature (it took longer to do so).

Heat pipes really do seem to be the way to go, and I bet you're right, that the HR05 would do the job.

There's one main issue with that for me unfortunately, on both of my boards:
clearance (CPU heatsink, graphics card).

My current solution has been to experiment with fan positions. I am going to try suspending a fan "midship" in my case on elastic and hooks to see if I can cool it down.
Top

theycallmebruce wrote:Yeah.. on my first PC with the toasty chipset, I bought a Zalmann heatsink which, while much larger than the factory one, still got to the same temperature (it took longer to do so).

If it hits the same temperature eventually it suggests something else is bottlenecking the heat transfer rate; it took longer because of higher heat capacity of the heatsink.

And surface area of heatsink has increased, so...

Get some airflow over there dood.

It's the same for me, getting bigger heatsinks for NB or HDD did not decrease their temperature by much, if there's no forced airflow.
Top

passive cooling does not help the NB cooling too much, I usually add a 4*4 fan on the Nb heatsink( cheap way) or change to aftermark heatsink.
Thermalright make some excellent one
Top

I always had HSFs blowing down to the board. My trusty SI-120 was recently replaced with the copper Ninja. So, I did this: 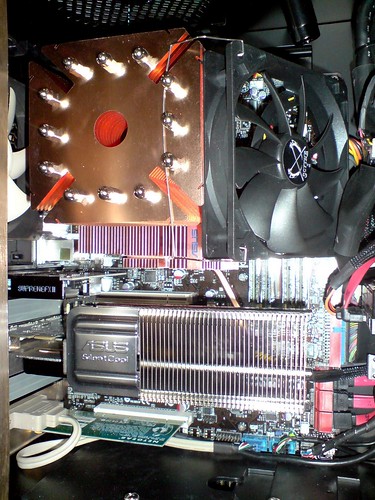 The fan is at an angle, blowing to the Ninja and to the board. The fan holder acts as a spring, pushing towards and lightly touching the IDE cables. Everything is now cool, it even blows a bit of air to the RAM.