I am very inexperienced with regards to electronics and solderings. It seems most if not all voltage reduction cables just have a single resistor on the wire for the yellow (+V) or red (+V), depending on which you have; the +V cable has a resistor to it.

If you're talking about 2 resistors Ohm's law applies and the voltage drop is the ratio between the resistors. So a resistor of 1 Ω and one of 2 Ω will see 1/3 of the voltage being consumed by the first, and 2/3 by the second.

When I look online at selections of resistors they are all rated for 0.25W, they are those tiny things. But you can also easily find .e.g 3W online. Looking at some of the loudest fans they draw at most 4W at 92x92mm. Yes, this is for a graphics card and I haven't checked but its fan might go up to 3600 RPM. It's 80 degrees value was 2250 RPM I believe, and its 100 degrees value was 3600.

Other fans that can do at most 2500 RPM draw at most 2.1W. So for a resistor I assume for a 1/3 voltage drop you will be looking for some 1-2W maximum for whatever fan you hook up. A 2W resistor is simply going to be smaller.

However I have no clue what would happen with PWM. If resistance of the 2nd component (the load) goes up and down, then the voltage drop will differ from time to time. If the thing uses a lot of current the resistance will be low and the voltage drop of the resistor will be higher, which means that when it draws more current, it will get less voltage, and that might cancel it out in some way.

Then, to get a fixed voltage drop, I would have to employ this thing. To create a voltage divider I must employ two resistors in parallel where... I mean. They have to be in sequence but the gap between them must feed to the fan. So now I need two resistors where one goes back to the black wire (ground) and the other one is in sequence to the fan, that also feeds back on the black wire.

However the second resistor (that feeds back to ground) is in effect part of a parallelel circuit that also contains the load:

Since the voltage drop for resistor 2 and load is going to be identical its size (magnitude) is going to depend on the resistence of the parallel block with respect to resistor 1. If the maximum power draw (current draw) for the load is say 0.30 A with accompanying resisance of perhaps 40 Ω, then at maximum draw if you put a 40 Ω resistor at the 2nd spot and a 20 Ω resistor at the first spot, you will have 8V for the fan.

I'm gonna have to stop thinking because I'm not doing very well at it.

The maximum resistance minimum voltage drop is 1/4 (for these figures) at 3V up to a fan voltage of 9V.

3V of 12V is still 1/4 lower. For a more pronounced voltage drop the first resistor must be higher; 20 Ω would give 6V reduction at full speed.

No longer full speed then.

Provided that anything I've said here is even moderately correct.

Let's assume x = 0.43 is the minimum fan speed ratio. The above becomes:

Assuming the base fan has a resistance of 40 Ω at full speed. At 28 Ω you utilize a 14 Ω resistor to get the same values as above.

So: assuming the fan has 40 Ω resistance at full speed. Assuming its current draw doesn't go down as voltage drops, and assuming we create a voltage divider circuit with one 40 Ω resistor in parallel with the fan, and one 14 Ω resistor ahead of it, both consuming....

And now my calculations and my understanding defeats itself because the current draw among both components (first resistor, and second block) must be the same for this "serial" circuit. As the second block draws 7V the current draw ought to be 0.3 + 0.18 = 0.48 A, but because my hypothetical fan does not honour Ohms law as voltage drops, it is more than the 0.35A that the first resistor is supposed to draw (or see pass through). If the amperage of the fan also goes down then both fan and resistor (2nd) draw 0.175 A and the entire thing is right again at 0.35 A for the first resistor.

Otherwise it would draw more than the resistor (1st) is supposed to be able to do. For the 5V it has at this point.

Lol I think I have already said it. It's a graphics card fan that won't honour the Maxwell architecture BIOS values (that I modded, and which it recognises, to some extent) so it is stuck at a base minimum of 1500 RPM and has a fan that can do reportedly do 3600 RPM max.

And it is not hard, in principle, to take 2 wires out of the housing, give them its own housing, put a header to it, and now you have 2 (or 4) pins that you can use to solder something onto. The easiest thing is to just solder a wire (or 2, actually) to some regular 3-pin fan plug so you can attach it to an ordinary voltage controller. Then you'll ordinarily simply have a resistance on the wire in between that, with a fixed fan voltage, would just lower the fan's voltage by a fixed amount, what I mean is that the power (current) draw of the fan is ordinarily going to be fixed and so the speed reduction will also be fixed although it will vary by fan (the voltage drop will actually vary by fan, I believe).

But I'm not all too keen on how it works so I was just asking.


A resistor divider circuit is for creating a voltage that's a fraction of an input
voltage, and expects to be driving a very high impedance load (otherwise the
divide ratio is influenced by the load).

That's for 12V. Now, what if you apply less than 12V to the fan? You've set a new lower maximum rpm for 100% PWM signal. So, a 50% PWM will run at roughly 50% of the new maximum. Note that fans aren't terribly linear and they aren't a purely resistive load. So, using a resistive splitter can be a trial by error process.

I've wanted to mess around with using diodes to drop the 12V rather than resistors. Don't have to scramble the brain trying to figure out resistor values.

Ah. I regret not just going ahead with my voltage divider plan: I think it would have worked

Today I seem to be going for a voltage regulator but the annoying thing is that you have to get a fixed value (or get a variable one with a potentiometer to go with it, which then has to be a form of turny button).

Basically if you get one of these: Which, at a cost of some 0,70 €, will dyamically reduce 12V to 8V at a fixed output value with the same amperage, and the 4V is just dissipated at heat x the same amperage. No matter the load.

Quite boring, isn't it.

Too much trouble to look into the variable ones now. I don't even know for how much the fan is rated. I will assume it is rated at 40 Ω nominal at the high end but I've since learned that resistance goes UP when the fan spins FASTER. If I assume a startup amperage greater than the rated amperate (of say 0.16A as I saw one 2500 rpm fan to be) the resistance at start is going to be lower than that 40 Ω, suppose it takes 0.5A at start = 12 / 0.5 = 24 Ω at the low end.

This fan will then have a low resistance of 24 Ω and a high resistance probably at its rated amperage, which would be 75 Ω for a 0.16A fan.

Assuming normal operation between 40Ω and 93Ω is what I already had as an assumption it's just that at 93Ω the voltage drop will be very modest ...err, wrong again, it will be 28 Ω at 93 Ω for 1/3 if the first resistor of the voltage divide is 14Ω.

The funny thing is that the more amps the fan tries to draw, the lower its voltage will be :p. It seems like a power delimitor to me, you can probably calculate the maximum Wattage this whole circuit will be able to draw

Basically with 12V and a 14Ω resistor you'd be in trouble. If you increase the resistors to match the 93Ω what you get is:

So lol, this gets harder and harder :p. But actually a resistor should be able to withstand a bit higher wattage for a second.

Let me summarize that again:

* A voltage regulator is a cheap solution that looks ugly on a wire.
* The earlier ohmages I chose should already do the trick provided the fan still starts.
* A start amperage of high value might burn the first resistor if it takes too long
* Raising the resistor values reduces this threat but also lowers the start voltage beyond reasonable amount.

Well I ordered a bunch of stuff. Enough to make 3 different 'voltage regulators'

I got some of the items I ordered.

I am really good at screwing things up, and this time I used a screw for it.

Actually a drill which is pretty much the same thing for this respect.

I got these little boxes where you could put electronics into. They are only 35mmx35mm x 15mm high.

Drilling in plastic always has the risk of your drill getting a life of its own if you don't hold the item tight enough and it is slung along the track of the drill and this can basically create a hole too large or just gaps to the side.

My first drill was perfect. 1. Small wood drill to make the initial hole, 2. 5mm metal drill to complete it.

Second hole ruined it. (It was a 6mm metal drill). I used a 6mm wood drill and not only had I miscalculated the epicentre of the hole, due to instability it also took too large a gap. The plug was drifting in the hole. I fixed it with glue and then I got impatient and put the thing on top of a light bulb and the thing melted --- slightly.

Enough to ruin it for me. 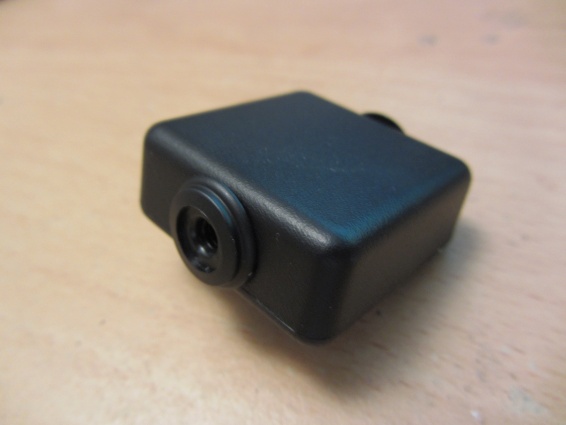 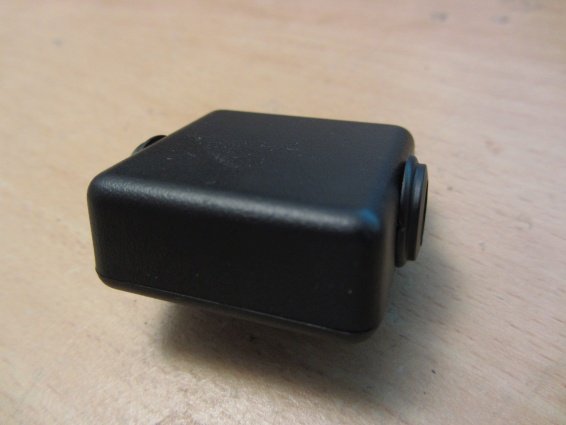 First hole was perfect. Second attempt the drill got a life of its own and "upped" the epicentre of the hole by 1mm and that is why you see it sticking out so much.

Actually the other way around. First was wrong, second was perfect. It's really not that hard to get it right. But if you're me

This is just really tiny. Maybe I should have put some coin next to it but this is really the size of two fingers in width (and length).

The cable plugs are what they call "glands" and are just the cheapest here:

I hadn't seen the "build your own fan controller" thread.

My GPU is SO QUIET NOW it is unsettling.

So I don't know what the guys at MSI were thinking (they were probably guys you know) but this:

I've been running Furmark for some 10 minutes now at it doesn't go above 66° C.

What's UP with this.

Why do manufacturors create lousy loud components that do not need to be???

I just asked MSI about it. I EXPECT ANSWERS :p.

Well, this was another nice waste of time as death is looming and destruction is nigh.

Return to “Fans and Control”