They make noise, too.

Yes! Myself who does not understand a damn thing of English, would be very well served with a TL;DR.

Maybe i rushed into Asus, seems there is going be a Lightning, in the past lightnings have been cards that OC a little better, but one of the few that used triple fans 3 pci slots, now a days that seems to be the trend with most manufacturers, so might or not be worth it, in the past, a similar TDP card, GTX980Ti Lightning, TechPowerup said the following,

During serious gaming, the card stays extremely quiet; it is actually the quietest GTX 980 Ti we have ever tested, while being the fastest with the highest clocks!

Wow, that would basically mean that it would not be just quiet, but SILENT for about 80% of the time.

And if you have two 140mm Silent Wings 3 blowing directly at it, as is the case with Define Mini c...

They noted slight coil whine, but that is a lottery with every card.
Top

In gaming, the card is as quiet as the quietest custom GTX 1080 Tis we tested. Given the massive cooler and the low temperatures of only 66°C, I feel that MSI could have quietened the card down some more for slightly higher temperatures. But given the overclocking focus of this SKU, I can understand that temperatures were higher priority than noise.

It’s not the quietest graphics card on test but it is among the quietest GTX 1080 Tis available. The MSI Lightning Z is only marginally louder than the Gigabyte Aorus GTX 1080 Ti, to the tune of 1 dBA, and is roughly as noisy as the Palit Super JetStream and MSI Gaming X GTX 1080 Tis.

If not cherry-picked, then it's impressive; some coil whine though...
http://www.guru3d.com/articles_pages/ms ... ew,10.html
Top

These sites did not get similiar values. Can we conclude there was any process failure on the Guru3D reviews (note that idle noise starts in advanage in comparison to the other cards, making a uneven floor noise baseline)? 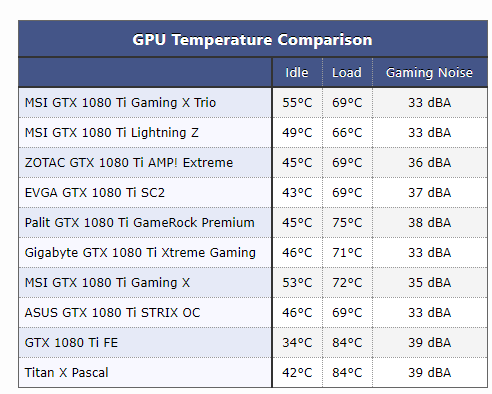 Starting to add reviews to the thread again

I'm looking to get a 1080Ti, and the amount of conflicting information is making this rather difficult.

Abula: Do you like your Asus STRIX? Would you choose something else given the more choices and information available today?
Top


whining_coil wrote:I'm looking to get a 1080Ti, and the amount of conflicting information is making this rather difficult.

Sadly thats the truth, there are no clear winners on the 1080ti, not a single card maker leads according to all reviews... in some wins one while in the others another. Even TechPowerUp that i trust more, didnt have a clear winner.


whining_coil wrote:Abula: Do you like your Asus STRIX? Would you choose something else given the more choices and information available today?

The strix is a good option, probably among the best, but not that its superb like in past gens some card was in noise side. That said Asus did come a long way from the GTX970 where when pushed hard they became jet engines (i lost faith on quiet SLI here on air), the GTX1080ti strix never ever has reached jet engine like, even pushed hard, but it does requiere a lot of air to be sustained quietly, with my FT05 AP182 at 600rpm (kinda inaudible) i can play low end games like Blizzard, but if i go into PUGB and Fortnite, i need to bump the case fans around 900rpms where the AP182 are very audible, but allows the Strix to not hit 85C and downclock itself. Now one thing that you have to remember is that im pushing it on 4k, and believe me the load that it takes to push that res is a lot, i tried this setup on a 1080p and didnt hit even 80c on 500rpms on the case fans, so if you are not going for 4k or close, you will have lower temps than me and very likely less noise. Asus has a good thing though, if you decide to go with it, and on your setup with your games and quality the card runs very cool, let say 70C on load, you can download the Asus Silent vBios which lowers the fans profile to have a much quieter setup at the expense of heat, this is something that i can't do, simply on 4k the card needs the cooling.

I think with the Asus vBios you can achieve the quietest setup on a GTX1080Ti, but you do need a case with very good ariflow, and the FT05 isnt enough at quiet levels, im about to move into Corsair Air 740 (second one) with a lot of beQuiet fans to see if i can manage, but something tells me that 4k is simply too hard for the GPU. I think the vertical orientation of the FT05 affect some coolers in a negative way, and the size of the FT05 dont allow all the mosnster cards in lenght, so decided to move away toward a more traditional case but with good airflow... will see over the weekend.

Something to keep in mind is that a lot of manufactuers have released new cards, like MSI released the lightning and now the Trio (which is very similar on cooler to the lightning) and EVGA also released a 2.5 cooler on their GTX1070ti (all their cards were 2 slots in this gen), so maybe they will release a GTX1080Ti with 2.5 cooler (this is just speculation on my part), but talking about EVGA, Techpowerup review it and came out really well noise wise, this is how i would have love to see any GTX1080Ti, EVGA GTX 1070 Ti FTW2 iCX 8 GB Review (this is not the 2.5 new cooler). Gamernexus did a video on the new 2.5 cooler form EVGA, GamerNexus EVGA GTX 1070 Ti FTW Ultra Silent Tear-Down & PCB. EVGA is a brand that i have used in the past, but not as much as MSI or Asus, that said, its very likely my next card will be either EVGA or Gigabyte, as MSI and Asus have decided to move away from 3x Displayports, but will see, i still have things to test on capture cards and HDMI 2.1 is just around the corner, things might change in the next 6 months.

Though having said that I have been looking and think the 1080 should be pretty silent, the TDP on max load is far lower than a 1080ti.

Most people with a system for actual 4k use watercooling so no fans at all on the gfx, just on the radiators to cool them.

Another option you could look into is cases with a side fan mount, and then a 90 deg convertor riser for the PCIE slot. This way you can tilt the gfx card so its fans are actually facing the side mount. On a blower cooling card this could work well, side intake into fan intake = out the back of the card.
Top
Post Reply
75 posts