Ok ok, I just said 0db to bait you! But at last I've finished a rig I'm happy with and which I can't hear unless I really concentrate. First up thanks to all of you who have helped. I've had a few questions about drives, sinks and PSUs and without silentpcreview it wouldn't have happened.

I use my machine in my home studio, so I don't want to be able to hear anything when recording. With this set up I can switch the case fans off by just unplugging the fancontroller mounted at the front. But since I put the mCubed psu in everything is so much cooler that I don't need them until the machine has been on for a couple of hours. The set up is barely audible. There's some seek noise from the drives and a low hum from the PSU, [edit - correction, the hum was from something else in my rack that I couldn't hear before when I had the stock Fusion PSU. The mCubed is inaudible and I'm really happy with it] but to put those in context they can't be heard over one Noctua fan at 5v. It all lives in a box with a door and when that's shut there's nothing to hear.

I tried my own HDD sandwich which was great except for seek noise. viewtopic.php?t=41854 The Scythe quiet drives are better. I also found the nvidia GF7600GF runs pretty hot - at an idle of about 80C. So I just stuck a big heatsink on top of the stock sink with some transfer tape and it runs about 15C cooler. There's pics below with/without the sink.

So here's some pics: 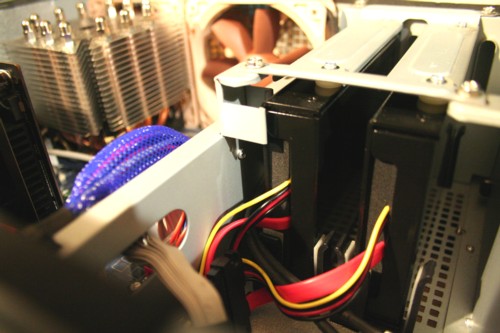 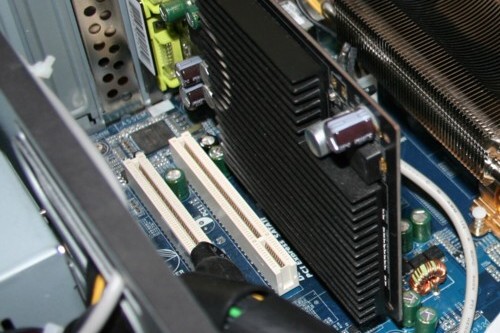 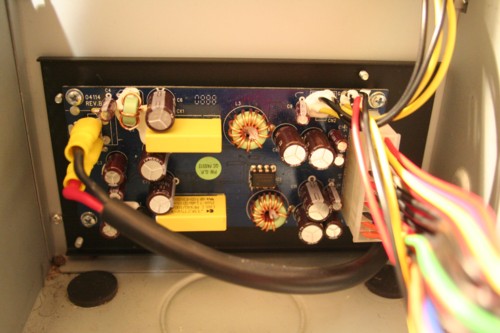 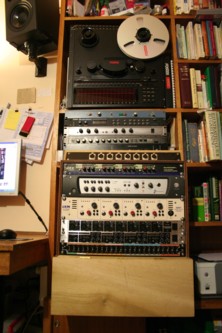 For any interested musos, this system is running protools LE v7. Most of my stuff is outboard so I'm only running 3 or 4 plugs mostly. It copes recording 16 tracks from my tape machine and I don't think I'll ever need more than that at home.

My first newbie post was about water cooling because I thought that might be the way to silence the purpose built "music computer" I bought. Luckily your advice was "water won't shut that up" and I sent it back! So thanks heaps everybody for saving me the time and effort of fiddling with that!
Potsy
Last edited by potsy on Sun Jul 20, 2008 5:36 pm, edited 2 times in total.
Top

I can see why the GFX card would be hot - no place for air to move around it! There's some serious dead space there. You could try just taking off the slot cover with those dinky holes in it - those holes aren't doing anything.
Top

That's a good simple idea. I might as well take them both off.
Top

Re: 0db at last - a machine I can't hear in my home studio

potsy wrote:But since I put the mCubed psu in everything is so much cooler that I don't need them until the machine has been on for a couple of hours.

That doesn't really make sense. The stock PSU is completely isolated thermally from any other components; it contributes no heat into the system at all. There should be NO difference in temperatures with either stock PSU or fanless PSU. If anything, the latter will make the PSU chamber hotter, because there's now no forced airflow in there.
Top

Mike, yep, point taken. It's probably because I'm keeping it in a box - the stock psu was blowing it out the back of the case but when the box is shut the heat has nowhere to go (at least not quickly). But having said that I guess that without the hot air from the psu in the rack it just takes a bit longer for things to reach the same temps they did before. I haven't observed over time yet.

Of course I might have been talking it up a bit too - I'm not immune to being overexcited about finally not hearing the PSU! I've also just remembered that my last recorded cpu temps are from before I replaced the Thermalright XP120 with the mini ninja - oops.

Now its as quiet as it is I'll probably take the door off the rack too. So at least the mCubed psu allows me whatever natural airflow there might be just because it's quiet enough for me to do that.
Top

nice setup. i see a Digi rack - nice system. I was thinking of going with the Digi 003 for my PC rig but I passed up on it and went it an RME and Apogee system. I have a PT HD on a Mac as well and it sound pretty darn good in comparison. Good job!
Top