This system was built to be a replacement for the laptop I was using i Bergen untill recently (it died on the plane home). Built it last weekend from misc parts I had laying around.

I'm definently gonna get a new cpu cooler for it, as it gets noisy when cpuload goes up.

Its fairly quiet when I'm not abusing it, the cpu cooler will run at about 700-1100rpm and the case fans will run at around 350-400rpm.
This is below the ambient noise level if I have the window open (I'm in bergen, its windy here..)

... its my old folding@home box, but with new mobo and drives.. as the new mobo is identical to the one in my workstation I just mirrored the system drive and put it in.. no install to worry about... 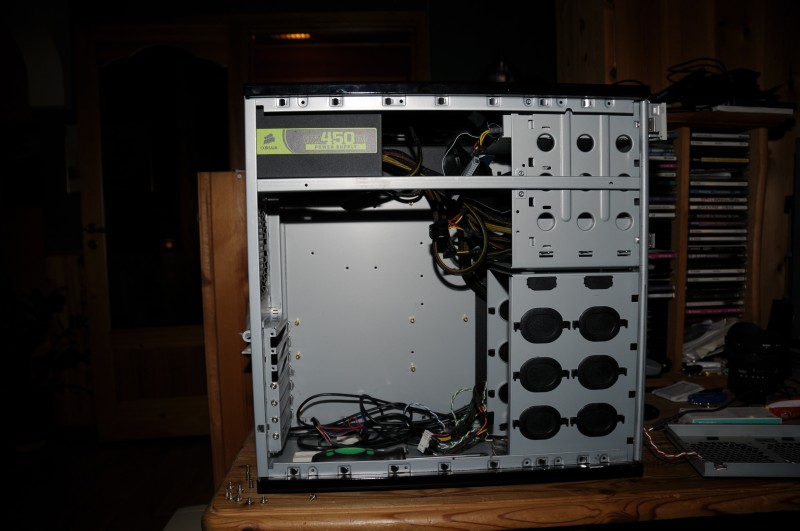 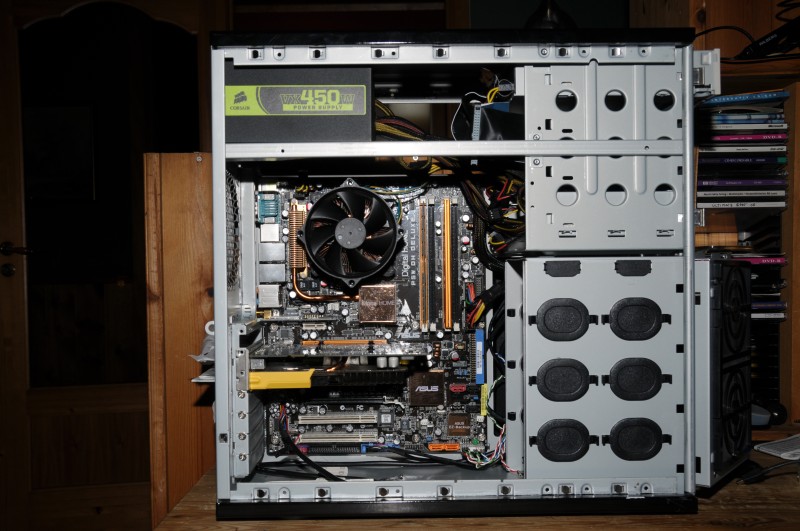 Duct/Gaffer tape is my friend, that vent is a dust magnet... 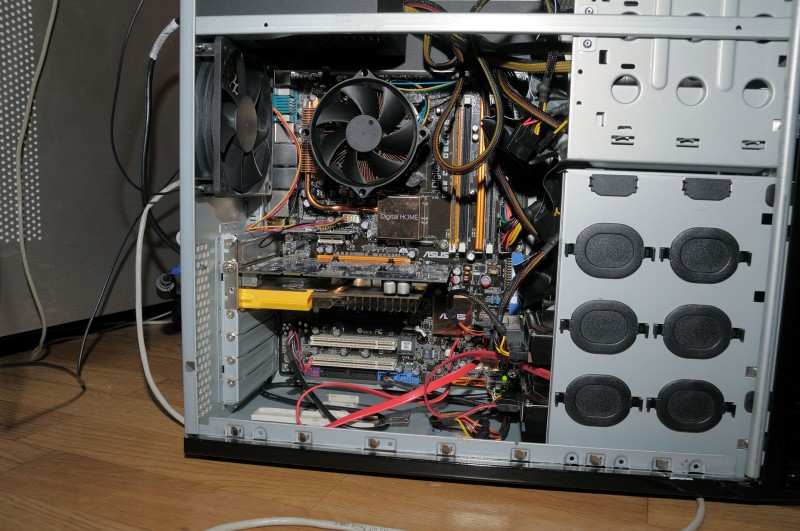 All done and running

Did a couple of mods to it;

- Put in a Nexus fan below the DVDRW, far into the drive bay, and removed the metal blanking plates.. no filter tho, but the aiflow isnt massive anyway - this to reduce cpu temps
- Removed and reseated cpucooler with new TIM, correctly applied this time.. No big difference in temps as of yet, but it seems to react faster to fan speed change, thats good.
- Moved the 320GB and 500GB drives from the normal drive trays and into the stock elastic bands, this helped more than I thought...

LOL, your "spare parts" computer is about 1000x better than my main comp

wish I had spare parts like that lying around

I never found my Solo all that cramped to work in. You might want to try running more of the wiring behind the motherboard; there's plenty of space and it gets the wires out of your way. If you look at my system, you can see how much space this will save.
Top

Well, I scour the webshops for good deals, so when I find a good mobo for next to nothing, I buy it.. same with cpu, ram, gpu etc... I paid less than half price for the E6600 last summer, and I had it running in my P5K-VM for a good while...
Top

I wish I had a E6600 laying around in spare parts.

my spare parts pc is an athlon1700

Haha, yeah.. I had that E6600 laying around for a while, bought it used off a friend, and used it in my folding@home rig for a while, but when my laptop shit itself I had to take action

I'm about to order more spare parts and a HTPC chassis + new 1TB drives... gah.. so much money...

a 780G based mobo and one of the newer low-powered X2's should be fine as a backup box if something dies, methinks...
Top

Unless you really need the processing power, why not lower the CPU speed and undervolt it (even further?)?
Top

the P5W DHD wont allow undervolting in bios (1.2V is the lower limit), and Im running it at 2.7GHz for F@H, so you could say I need the processing power, hehe

This PC will now do service as a HTPC for a while. Chucked out the P5W DHD with defect audio, and put in a P5E WS PRO I had spare..

And by cheating a little (looking at other solo projects) I got this version alot more tidy than the previous incarnation.

The Nexus cooler, however, will be removed shortly, the pushpin mechanism on this cooler cannot provide enough pressure, so the temps are -WAY- too high. A Xigmatek 1283 will take over.
Top 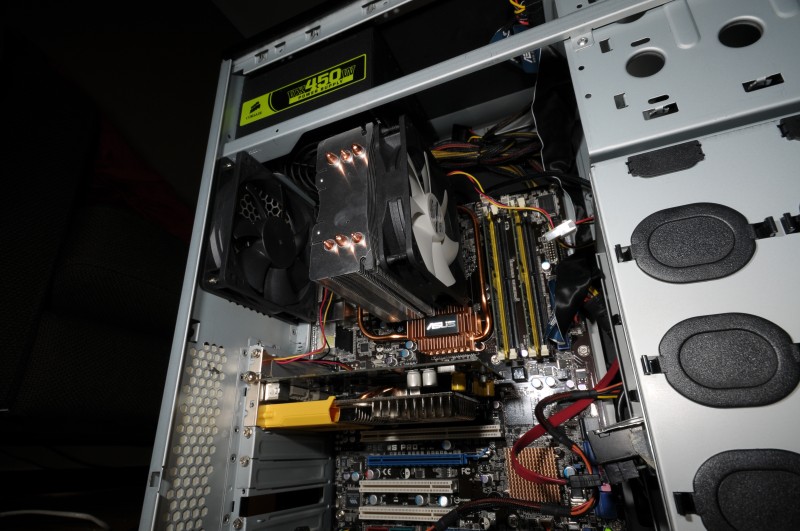 ... I just need a decent DVI -> HDMI cable, and then I can move it away from next to the livingroom table (so the VGA cable will reach the projector) 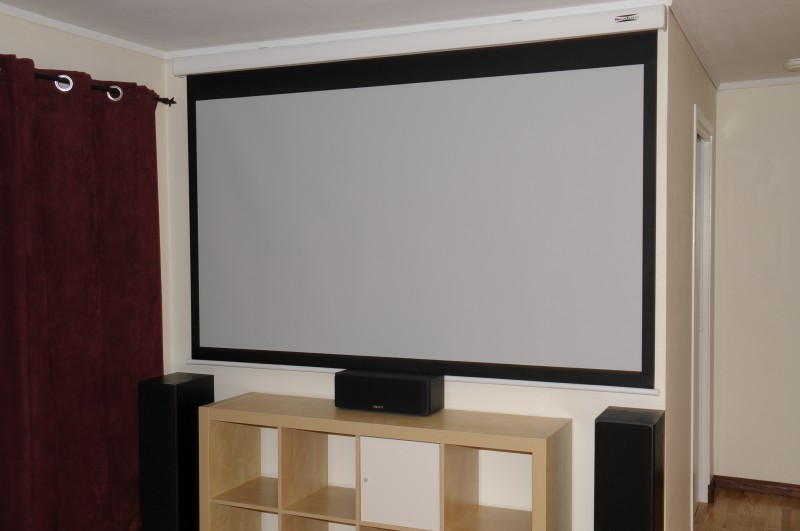 Check out my P182, Workstation-link in my sig, it is even cleaner than my Solo atm.. took a few hours, hehe
Top 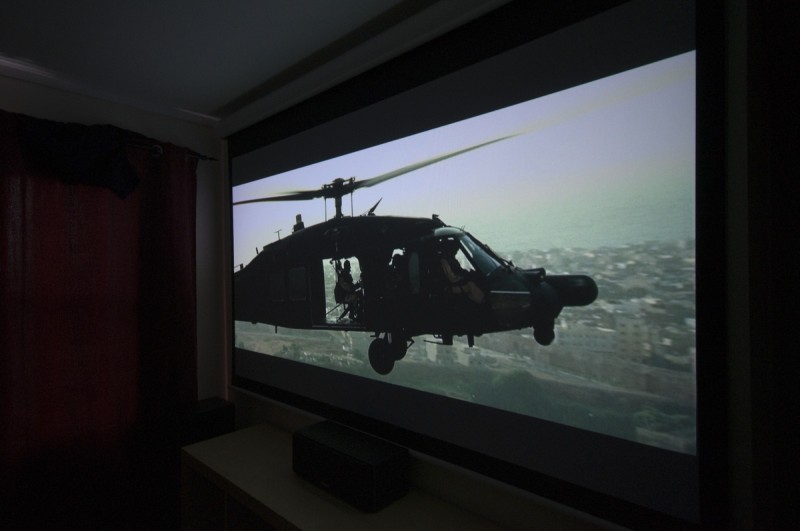 I sent this link to a colleague who is trying to get a similar setup at home.
He wondered what projector you were using there and whether you'd rate it?

The Projector is an Epson TW700. The model is now quite old, and there should be newer ones on the market with better specs. It is however pretty quiet in operation, and has decent black levels and colours to boot. Should be used with a grey screen tho, using a silver one will make black levels horrid, which goes for most LCD based projectors.

I have moved since those pictures were taken, new ones will be posted when I get back from vacation.
I've also put in a new 250GB 2.5" SATA drive instead of the Seagate 160GB that was in there, so yet another noise source mitigated....