They make noise, too.

It seems that there's a new VGA cooler in the japanese market, and it's from our beloved Scythe.

Here's the official data from Scythe (in japanese): http://www.scythe.co.jp/cooler/musashi.html

And here you have some pics:

Its too long and the fins spacing is a bit too tight for my liking.

looks nice with the copper pipes

2 large fans seem like overkill... maybe it just performs better with medium airflow.. (poorly in low airflow ??) I wonder what the fin spacing is...
Top

2 large fans seem like overkill... maybe it just performs better with medium airflow.. (poorly in low airflow ??) I wonder what the fin spacing is...

The fan that doesn't cover the GPU seems to cover 45 fins (if I trust my non very good sight), so you could make your own count...
Top

With active cooling perhaps, but I'm more interested in (semi)passive performance. The fins run in the wrong direction.
Top

The heatpipes appear to be flattened, at least to my aging eyes, are they 6 mm or 8 mm?
The fans seem to be thin, could they be the same as in the Ita Kaze HDD cooler, meaning 100 mm and 1,000 rpm?

Of course it's designed to be actively cooled, not passive, and I believe it should perform well.
Top

This would work nicely in my HTPC since it doesn't overlap the card much. Right now im using a bent accelero with a fan nearby, which is not optimal. The fin spacing on his Scythe looks plenty wide enough as the fins are pretty narrow.
If theres 45 fins under a 100mm fan, its 2,22mm between them. Or if you subtract the thickness of the fins(0.4mm?) it would be about 1,8mm between them. And they look to be about 12-14mm wide, so the spacing would be 21.6-25,2% of the fin width. That's a lot of assumptions though..

Anyone care to count what the corresponding percentages would be on a Ninja for example?
Top

Looks nice... Musashi... Now we just needs Yamato and Shinano and Scythe line up has prides of imperial japanese navy in their line up... I know it would be cool to say I got Shinano, Musashi and Yamato coolers in same case ^^

the fan spacing doesn't seem as tight as thermarights coolers. That's good. But I doubt this can match S1 in passive...
Top

With active cooling perhaps, but I'm more interested in (semi)passive performance. The fins run in the wrong direction.

Thats true. The fins are in the "wrong" direction.
That not very good.

Yeah, we need more of these. I really like the big "one side" GPU coolers. Installation is so much easier and straightforward than with the ones with heatpipes bending to the other side of the card. It's just four screws and you're done. No smearing heatpipes with insane amount of TIM, fitting them in grooves and such.

What I would like to see though is a "Accelero S1 Deluxe" with the same design only with bigger fins (and perhaps another set of heatpipes). The weight of the S1 is so low it should be possible.
Top

Seems like its going for a similar idea to the TR rad2. Thin design, not great passive but with active cooling should be very good.
And this one comes supplied with 2 slimline fans, with variable resistors built in. Nice feature there, i wonder how quiet the 2 of them will go?
Top

I've been trying to find a good cooler for the 4850 that I'm going to be buying. Looks like I found another potential candidate.
Top

Well it's out.... worldwide at least.

shows that its not very effective. maybe the reviewers had a inconsistency, but it looks like they used a nexus fan on one of the tests and it was still pretty bad
Top

Bad? Not as good as the S1 with a 120mm fan hardly qualifies as bad. About on par with the Twin Turbo is good enough. And slimmer than the TT if im not mistaken. I had to severely bend the S1 to fit in my case, and with a 120mm fan its twice the thickness of the Musashi, and i have a card in the slot next to the GPU. The Accelero S1 without a fan is about the same thickness as the Musashi. I'd buy one.
Top

There are a few things that bother me or concern me about this cooler. Tell me if I'm all wet. If I'm wrong about any of these points, by all means, tell me. I wanted to like this cooler, but too many things about it just seem wrong-headed to me.
Top

1. The same could be said for almost all Dual-Slot-Coolers.
2. If one slot really makes a difference in your case, then yeah, it's a problem.
3. True.
4. If this cooler performs as one expects, with both fans at 5V it should still cool every card available, so I don't think adjustments are necessary.
5. True.
6. True.
7. Fans are 10mm. Scythe retails them. They are used on their Shuriken CPU-cooler as well. The size is very rare though.
Top

My point in item 1 is that why bother with the skinny fans? Whether they are 10mm (I have seen them spec'd as 12mm, but why quibble) or 25mm? Either way it's a 3-slot cooler. I guess if you already have them in inventory you might as well use them, and it does give the card a very streamlined look, but that's just marketing and surely a thicker fan would move more air more quietly.

The 2-slot thickness could be useful in the bottom slot. On the Asus P6T Deluxe, I will use the PCI-e slot that is second from the bottom, but a full 3-slot cooler could still be an issue as the mobo will sit right on top of my power supply.
Top

tim851 wrote:4. If this cooler performs as one expects, with both fans at 5V it should still cool every card available, so I don't think adjustments are necessary.

OK, then I'm simply stuck with where to stash these non-removable controllers.

I do agree with you though. I have a front-panel fan controller on my current PC and aside from making it easy to set the fan speeds, once they were tweaked for an optimal balance of cooling and noise, I have not touched them since. The pretty blue lights are nice, but it serves no real purpose.
Top

Imo, why not use this cooler like this: simply remove the two stock fans, and run it with one 12- or 14cm side-panel or top down fan (depending on your case layout)...should provide you with almost identical temps, considering gpu-ambient-temp is lowered even more.A nice airduct would be an option too ofcourse..

I have been waiting for at least one company to develop a nice single-slot fanless gpu heatpipe-cooler for a couple of years now, and this one would fit the bill.... it's only real con is it's length though and it not being single-slot again..., as mentioned above.
Smaller fins/shorter heatpipes would probably mean sacrificing performance, and positioning it closer to the card would mean sacrificing compatibility... 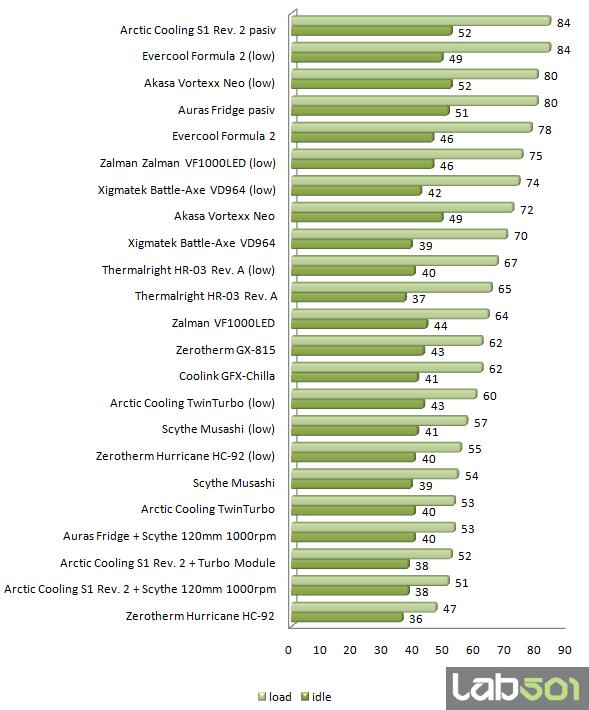 Sorry, maybe I'm reading the charts wrong, but how are these results not good? It's quieter than stock and is within a couple of degrees of the A/C S1/TwinTurbo and the Auras Fridge. The Zerotherm seems to be much better than everything.

It might not be the best cooler in the world but it's another welcome competitor in the GPU aftermarket cooler world.
Top

They also tested the Musashi with the fans at full speed

Aldo the difference in sound does not change much, it's still about 3 Db.

So there you go, the Musashi is even better as what the reviewer shows.
I have owned two of them in a HDF4850 CF setup and with the fans on low it's deadsilent and cools the GPU's under 55c at full load. Great!
Top
Post Reply
26 posts • Page 1 of 1